Called MA House, the structure behind this perforated metal facade has been divided into three wings and sits on a site surrounded by greenery.

Pitsou Kedem Architects borrowed a horse from a next door farm to star in the photoshoot for the project.

Communal living spaces sit to the north and a large master bedroom to the south, with children's bedrooms running in between.

Along with a pergola-covered pool to the west, these structures loosely enclose a sloping central courtyard and are connected by a series of stone-paved paths.

"On the one side, the courtyard descends gradually, so that the central building mass appears to hover in the air above it, creating a sense of lightness and airiness for the building," said Pitsou Kedem Architects.

MA House's main structures have been built with exposed concrete, shielded on the outside by the lightweight aluminium screens and facing the courtyard with large areas of glazing. Here, deep concrete reveals help shield small terrace spaces from the sun.

"Thin white aluminium was counterbalanced against massive and timeless exposed concrete to create a tension and contrast between the two materials and intensify each," said the studio.

This layering creates a series of spaces covered by concrete beams, but otherwise open to the elements, with shallow pools of water. Perforations in the aluminium screen give glimpses through from the exterior of the house into the courtyard.

"Large openings to the courtyard and the see-through pool to the front almost completely cancel out the walls of the structure and give people in the interior spaces a sense of being out in the open with only a concrete roof to protect them," added the studio. 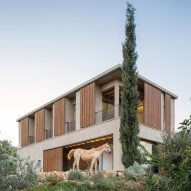 The sloping topography of the courtyard has been used to bring light down into a basement space, which is shielded by the large concrete overhang of the floor above.

Inside, the concrete has also been left exposed, creating a backdrop for the patterns of dappled light that travel through the screened facades.

Towards the courtyard, corner windows and sliding doors allow the living spaces to spill outside.

Pitsou Kedem Architects, which was founded by Pitsou Kedem in 2010, often plays with the idea of blending the internal and external with its residential designs.

At Split House, an internal courtyard is visible behind a gridded wooden screen, and at Pavilion House, internal spaces overlook a large pool that runs the length of the building.