The Miu Miu event took place on Saturday 4 July 2015, the night before the city's haute-couture fashion week for the Autumn Winter 2015 season kicked off.

The Rotterdam studio – which also designed the set for Prada's menswear show in Milan last month – built a temporary scaffolding structure around the sides of the room.

Miu Miu is the nickname of Italian fashion designer Miuccia Prada, who set up an offshoot brand with the same name in 1993 as a platform for explorations beyond her main Prada collections.

The Miu Miu logo was emblazoned above the entrance to the space in neon lights, while further tube lighting was attached to the structure's metal poles.

Dining tables were located beneath the metal beams, which supported a platform that was used as a catwalk to present clothes from the Miu Miu line.

A dance floor in the centre of the room faced a DJ booth, backed by a light-up wall that illuminated in time with the music. 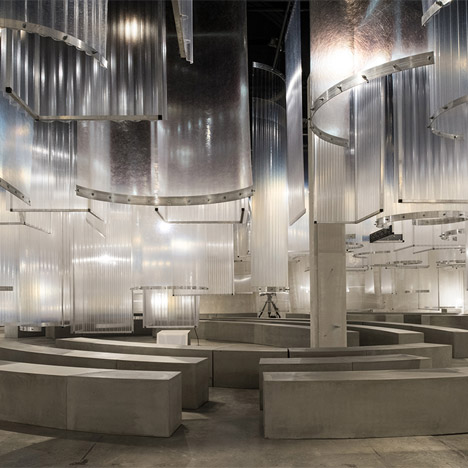 AMO and sister studio OMA have a longstanding relationship with the Prada group, having worked together for 25 years as a result of a friendship between their founders – architect Rem Koolhaas and Miuccia Prada.

Catwalks designed by the architects for the fashion house include a series of linked symmetrical vestibules and a runway that floated on a blue pool, while other projects have encompassed store interiors, furniture collections and even a portable, shape-shifting cultural pavilion.

OMA also recently completed the Fondazione Prada – a new arts centre inside a former distillery in Milan that opened in May 2015.

However Herzog & de Meuron was chosen to design Miu Miu's new store in Tokyo, which opened earlier this year.

Photography is by Agostino Osio, courtesy of OMA, unless otherwise stated.

More from OMA and AMO