Fans of Bubble Wrap are up in arms after its American manufacturer unveiled a new variety of inflatable packaging that doesn't pop under pressure.

North Carolina-based manufacturer Sealed Air, which has been producing Bubble Wrap for more than half a century, developed the new packaging material called iBubble Wrap to help save space.

While traditional Bubble Wrap features rows of individually filled plastic air pockets – resulting in a satisfying popping sensation when squeezed – its new counterpart will be less easy to deflate. It instead features columns of interlinked bubbles that allow air to be transferred to neighbouring pods when squashed, making it harder to burst.

The therapeutic sensation of popping the original Bubble Wrap has lead to its unorthodox use as a stress-relief tool, spawning a range of unofficial novelty products including calendars, clothing and iPhone cases.

Designers and architects have also experimented with alternative uses, layering it to create insulation for roofs in affordable housing, creating patterns in cast concrete by setting it against sheets of oversized Bubble Wrap, and using it to make individually-insulated workspaces and exhibition rooms.

News of the pop-less iBubble Wrap material prompted uproar among Bubble Wrap fans who took to social media to bemoan the discontinuation of their favourite packaging material.

But Sealed Air has tweeted reassuring messages that it will continue to produce traditional Bubble Wrap alongside the new material. 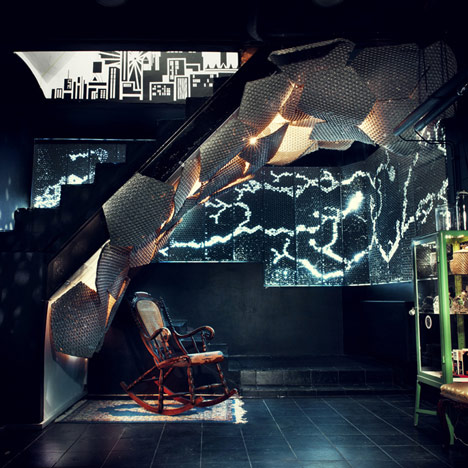 "Fear not fans of ‪#‎BubbleWrap‬ and its famous pop! We are excited to expand our Bubble Wrap family to include iBubble Wrap, but the original version you love to pop isn't going anywhere," said the company.

Rolls of iBubble Wrap are transported deflated to save on transport and storage costs, and pumped full of air on site. Sealed Air hopes hopes this feature will appeal to space-short online retailers such as Amazon, which use reams of the packaging material to protect fragile goods.

One roll of deflated iBubble Wrap is estimated to occupy one-fiftieth of the space of a roll of traditional Bubble Wrap, The Wall Street Journal reported.

"We want to protect what matters most to you, and a version of Bubble Wrap that doesn't pop (less air loss means more long-lasting protection against damage during shipment) is just one of the ways we can do that," the company said.

Bubble Wrap was invented by accident in 1957 by Sealed Air founders and engineers Alfred Fielding and Marc Chavannes who were attempting to create textured wallpaper by fusing together a pair of shower curtains.

The product, which featured a waffled pattern of trapped air, didn't catch on and in 1960 was redeveloped as a packaging material.

The company set up the annual Bubble Wrap Appreciation Day, held on 26 January, to acknowledge the material's popularity and growing array of alternative uses.

Sealed Air is the inventor and trademark holder for Bubble Wrap, but the product name has since become generic and similar products are now manufactured by many companies.

But despite the popularity of Bubble Wrap, the Sealed Air's best seller is in fact a type of liquid foam that moulds to the specific shape of a product. It is also reported to be experimenting with mycelium moulding – a type of mushroom root fungus used to grow bricks, 3D-print furniture and mould products ranging from plant pots to lamp shades.