French designer Samy Rio has received the highest honour at this year's Design Parade festival in Hyères for his products that incorporate bamboo.

Rio's Bambou collection uses bamboo cylinders as alternatives to tubes of plastic, forming sections of products such as the heads of hairdryers and bases for speakers.

It earned him the Grand Prix for Design Parade 10 on Sunday, as part of the annual event hosted at the Villa Noailles arts centre in the south of France.

"Beyond a simple aesthetic choice, we appreciate the mastery of presentation and methodical researches regarding the material," said the festival's organisers in a statement. "The development process of different bamboo uses has been determinant for our choice." 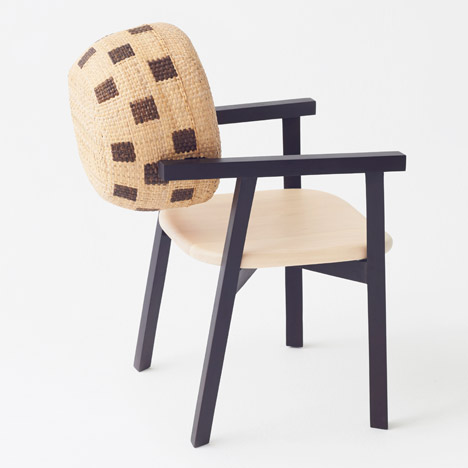 Rio, who studied at Paris design school École Nationale Supérieure de Création Industrielle (ENSCI), created two hairdryers to demonstrate the material's use. While both use bamboo for the main body, one has a fixed handle and the other turns on automatically when its shaft is unfolded.

His periscope-shaped speakers also incorporate tubes of bamboo at the base, which is engraved with control icons. Capacitive sensors that detect electrical pulses from the human body are placed behind the controls, turning the tube into a touch-sensitive panel.

Both products are shaped using a bespoke tool: a computer numerically controlled (CNC) milling machine mounted upon an industrial lathe.

Electronic components are stored within the already smooth interior of the dried bamboo tubes, which are sealed with an elastic polymer.

Modern plastic hinging is combined with a traditional sled construction to form the snow-skimming vehicle that folds flat, created by the same designers who previously launched a collapsible boat.

Frommeld and Mathies, who studied at London's Royal College of Art, also received a Special Mention from digital platform Eyes on Talents.

Christophe Machet's Toiture project, which uses recycled colourful flip-flop soles as roof tiles for temporary structures, was awarded the Public and City of Hyères Prize, while duo Els Woldhek and Georgi Manassiev won the Varois Cork – Special Award for their use of the natural material.

Other designers nominated for this year's awards included Ying Chang for her modular furniture system based on a two-dimensional grid, Marlène Huissoud for products made with the help of insects, and Maxime Loiseau for streamlined headphones that transmit sound through printed electronics.

Design Parade 10 took place from 3 to 5 July 2015, with exhibitions of the work at Villa Noailles continuing until 27 September.

Villa Noailles was designed by French Modernist architect Robert Mallet-Stevens and was built between 1924 and 1932. The centre hosts two other annual festivals: The International Festival of Fashion and Photography in Hyères – which has been running since 1986 – and the Pitchouns festival for children, launched in 2011.