Hidden behind a bookcase in a secret room, a fireman's pole offers a fast escape route from the top floor of this Berlin home by local studio NOWlab (+ slideshow).

The first and most prominent is a spiral staircase featuring colourful flooring and a rope balustrade, while the second is the fireman's pole, tucked away in a corner.

NOWlab founder Jörg Petri planned this second route as a shortcut – offering an alternative to the slides that have featured inside homes in New York, Tokyo and Jakarta.

"We wanted to create a fast and playful way to move from the fifth to fourth floor," explained the architect. 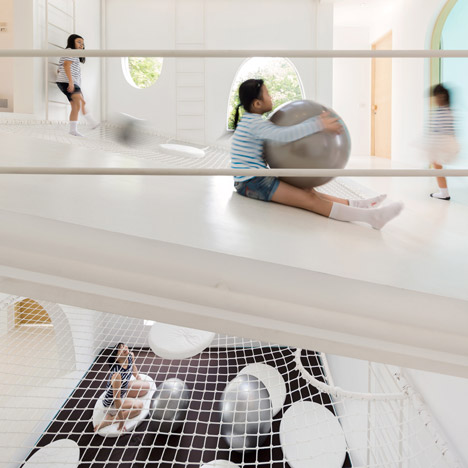 Jerry House by Onion is built around an indoor playground

"It came up in the early discussions with the owners, but the initial idea was to create a slide," he told Dezeen. "Unfortunately the floor plan did not allow enough space so we had to compact the idea – the result was a fireman's pole."

Rather than making it a central feature, the entrance to the pole is hidden in a room screened by a bookcase. It leads straight down into the client's home office.

"After some time the idea of the secret room came up and we integrated the pole in there, making it possible to escape unseen," explained Petri. "It creates an efficient and easy-to-use circulation loop between the two floors."

The apartment occupies a rooftop extension to an existing residential block, taking up the fourth and fifth floors.

The spiral staircase is positioned at the centre of the space, framed by the walls of the master bedroom.

Slender treads fan out around a central column, with wooden surfaces that match the herringbone patterning of the surrounding floors. These are coloured in vibrant shades of red, yellow, blue and green.

The intention was to reference an existing "Brandwände", or fire wall, in the centre of the building and the urban foliage that grows across it.

"In the fall, this green wall creates an amazing amount of natural colour gradients and growth patterns," said Petri. "We wanted to create something inside the apartment to link to this specific and amazing natural phenomena."

There is no balustrade, but a rope hangs through the centre of the staircase to provide something to hold on the way down. There is also a skylight overhead.

"Due to the small floor plan, we also had to create a compact staircase," said Petri. "The rope was a good way to install a handrail without decreasing the space to much. It works really well, for kids and adults!"

The home has entrances on both floors. On the lower level, the doorway leads through into a generous hallway, with the master bedroom and bathroom on the left, and the work space and children's room on the right.

Upstairs, the majority of the space is taken up by an open-plan living, dining and kitchen space, which is partially screened from the entrance by a row of vertical wooden slats.

Other houses with unusual ways of travelling between rooms include a Japanese home featuring both climbing walls and ladders, and a model house where walls double as skateboarding ramps.