These three zinc-cloaked towers form a power plant on the roof of an old beer brewery in Sydney, which will supply energy to a new housing and shopping complex on the site below (+ slideshow).

Local studio Tzannes Associates designed the plant to provide hot and cold water as well as electricity for over 2,200 apartments that will be built within The Brewery Yard on Sydney's Irving Street.

The towers are the first stage of the A$2 billion (£956 million) scheme by Australian property developers Frasers Property and Sekisui House on the site, which will also include shops, a hotel and student housing as well as a public park.

The metallic trigeneration towers – so-called for their ability to heat and cool water as well as provide electricity – contrast the old red brickwork of the brewery, which closed in 2005.

"The built form of the project needed to provide a memorable expression of this important new technology within the urban context while also meeting the demanding technical requirements of the cooling towers and enhancing the heritage significance of the buildings," said the studio. 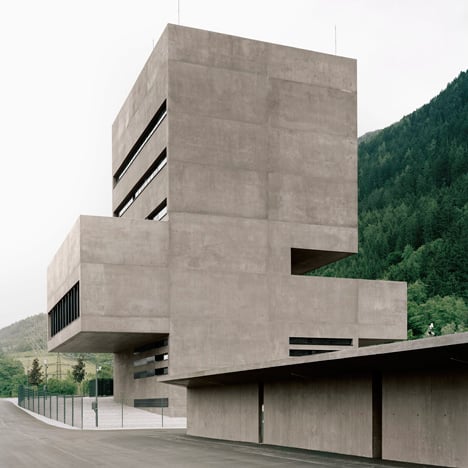 "We developed an innovative formal solution to this problem where the form of the new work arose from the integration of complex profile of the existing roofline with the organic regular form of the plant equipment within."

Moulded sheets of zinc mesh highlight the alien, curving form of the tower trio, which is set atop the roof of the brewery's boiler room.

Their perforated metal coating visually links the intervention to Denton Corker Marshall's aluminium-skinned building for the University of Technology, which sits to the rear of the site. The school's Frank Gehry-designed campus, which features a facade intended to look like a rumpled brown paper bag, is also located nearby.

"The transparency of the mesh has been minimised, enhancing the solidity of the form while providing permeability for the cooling towers that need large volumes of air intake," said the studio.

"This form was wrapped in custom-made zinc mesh sheets, like fabric draped over a curved frame."

Much of the 20th-century brewing site was cleared to make way for the scheme, but the red brick boiler room is retained to pay tribute to the Carlton & United Breweries company, which last occupied the building.

The building's giant faceted coal scuttles stores were also retained, and can be seen from the ground below.

"Fittingly, the new plant room hovers over the former Old Boiler House, the original power station for the site which operated in various formats until it was decommissioned in the 1980s," said the architects.

"The original inverted pyramid coal hoppers are retained in situ within the new zinc-clad enclosure and informed the volume of the base of the structure."

Steel beams that support the towers form a scaffolding-like structure that is left exposed from one side of the building, reinforcing the former industrial use of the site.

A tall brick chimney to one side of the former boiler house is wrapped in metal caging and echoes the materiality of the conical cooling tanks.

Tzannes Associates, which was founded in 1984, has also designed a foliage-clad school in Sydney which was shortlisted for a National Architecture Award by the Australian Institute of Architects in 2014.