Layers of springy nets stretched across an atrium at the centre of this beach house in Thailand by Bangkok studio Onion create a vertical playground that can be used to travel from the top floor to the bottom (+ slideshow).

Onion designed the interior of the holiday home at Cha-Am Beach for a family with four sons, who wanted a playful space that encourages a different way of living from their main residence in Bangkok. 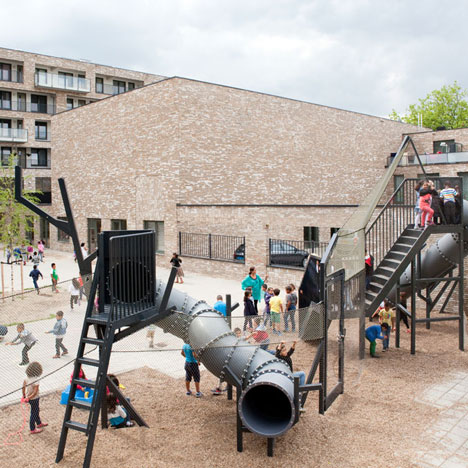 The studio based the design on the popular Tom and Jerry cartoons, imagining the space as "a big piece of cheese" full of holes and a continuous circulation route like a Möbius strip, which "would be a desirable route for Jerry to run away from Tom Cat."

"Jerry House is thought of as the object that children would yearn for and that increases the meaning of having a holiday at Cha-Am Beach for the parents," explained Onion design director Arisara Chaktranon.

Five layers of netting with different slopes and heights are suspended across a void that rises from the first to the third floor, creating opportunities for different types of play and movement through the house.

A staircase located along one side of the atrium provides a conventional circulation route between the different storeys, while ladders and intentionally misaligned holes in the nets offer a more fun way to ascend or descend.

"Running, climbing, hiding, hanging and even falling are the proposed physical activities which exceed the boundary of common lifestyle," added Chaktranon, describing how the residents can drop safely between levels, hang from the angled netting or slide down sloping floors.

At the top of the void, a ceiling covered in mirrored film is intended to create the illusion that the space is much taller than it is. This also offers a view of the various layers of netting, which aims to make those suspended by them appear as if they’re floating.

On the third floor, a hidden sliding door connects the highest net directly with a bed for one of the sons. This is contained in a wooden structure that also houses another bed on the opposite side of a larger tunnel leading to the main staircase.

Further bedrooms at the other end of the top floor are connected by a tunnel that offers two of the children the option of swapping beds.

The designers employed a monochrome colour palette in the main living areas, with a black carpeted space below the netting contrasting with white walls and padded cushions spread over the different levels.

Colour is used to differentiate the bedrooms, with the master bedroom and guest bedroom on the second floor painted in mustard yellow and light purple respectively.

The tunnels and sleeping areas for two of the sons are blue and the other bedrooms are light green.

Arched windows, doors and recesses for light fittings used throughout the house add to the playful aesthetic. The master bedroom also features an array of geometric openings with hinged shutters that offer views to the outside or adjoining rooms.

A dining space on the ground floor next to the play area looks out onto a swimming pool, while stairs next to a kitchen island lead up to a lounge. The ground floor houses services, storage space and parking.

Onion has also designed a home in Thailand for toy-bear collectors featuring an interior that replicates the cabinet used to display the bears. The studio later extended the bear display into the home's garage.