Ampe Trybou Architecten added a crinkled roofline to this terrace in Belgium, marking the boundaries between the five homes inside whilst also referencing the buildings that stood on the site before (+ slideshow).

Located 10 kilometres away from the coast, the terrace provides social rented housing in the small Belgian village of Westkerke.

Ampe Trybou Architecten used a limited palette of brick and metal to create a sense of continuity on the street, which already features a mix of architectural styles. The crinkled roof was then added to reference the varying heights of the three buildings that formerly stood on the site.

"The villa on the right side of the terrace is built in a specific style that we could not repeat today, and the house on the left is generic – a bit boring," the architects told Dezeen. "We wanted to make a soft transition between old and new, and we wanted to keep it small-scale, like family houses."

The terrace is part of a bigger project by the architects, called Satelliet, which provides 18 new homes, built as four clusters around a block in the village.

The homes range from one-bedroom apartments to four-bedroom houses, and feature paths leading to land in the middle, where a park and 36 new homes by the architects will soon be built.

"The four new clusters are like satellites around the block, and each has paths and underpasses to provide a gateway to the new park for pedestrians and cyclists," explained the architects. 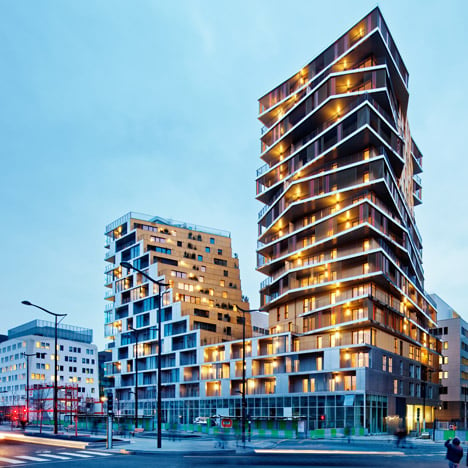 The spread-out design follows in the footsteps of other recent housing developments, including a ranch-like scheme set around a central courtyard in Belgium, and 306 new homes near Cambridge designed around meandering paths.

The terrace forms the largest cluster in the Satelliet project, with five three-storey homes. Four of the homes have an internal width of just 3.6 metres, and a length of 15.6 metres, and feature internal patios to bring light into the centre.

The other three clusters are designed as smaller-scale two-storey buildings and feature a mixture of apartments and houses.

A carport was built in the land behind the homes, and provides a covered link between two of the clusters. It contains storage for garden equipment and features a zigzag roof to echo the creases of the terrace.

"We wanted it to be an interesting building with a visible green roof, and not just an ugly, boring carport," said the architects.

All the homes are covered in bricks of varying tones, with some surfaces featuring bulging mortar.   "We alternated thin joints with bulging mortar to create subtle differences on the facades and articulate entrances," said the architects. "The nuanced colour of the bricks also creates a transition between the neighbouring that is not so brutal. We didn't want to make a statement."

The homes were designed to require minimal heating. The main structure is concrete, which naturally absorbs heat in the day and releases it slowly as temperatures drop, and all surfaces have been insulated, with polyurethane used for the facades and floors, and mineral wool used in the roofs.

The homes also feature heat recovery ventilation systems that modulate temperatures inside by extracting warmth from stale air as it leaves the homes.