The Osaka office of Nikken Sekkei's interior design studio features a bookcase conceived as a "stand in a stadium" – the latest example of the trend for bookshelf staircases in both home and office interiors (+ slideshow).

The studio already has offices in Tokyo, Nagoya and Shanghai. For its fourth office, in Osaka, the team decided to install a bleacher-style seating structure that faces floor-to-ceiling windows to offer views out over the city skyline.

"We set the bookshelf at the centre of the office, and aimed to create an environment where anyone can pick up a book at any time," the designers told Dezeen.

"The staff can sit there to read, with the view from the high position making a change to their mood."

Constructed from recycled scaffolding planks, the steps are hollow to store books and magazines. When looking for a publication, staff members are encouraged to clamber up the five-level structure.

"We realised the convenience of integrating bookshelves and seats to form stairs," the designers explained. "The bookcase has been designed like a stand in a stadium. It is necessary to climb the bookshelf to find the book you want."

Bleachers – high, deep steps suitable for sitting on that are more typically found in sports stadiums – are becoming popular in offices. Other staircases you can sit on can be found in the workspaces of Evernote, Fairphone and Eventbrite. 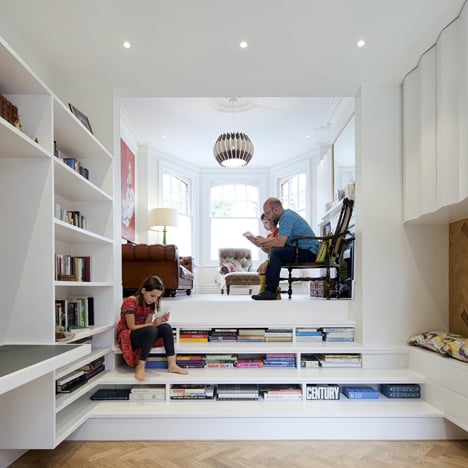 Nikken Space Design's workplace is intended to promote creativity and productivity, reflecting the way their staff like to work.

"Our new office needed to be a place that ensured more creativeness and higher productivity, and to do this we had to understand the nature of the staff members," explained the designers.

Desks made from recycled plastic bottles are modelled on a "sushi roll shape" and shift around to allow project teams to move and sit together.

"We knew at an early designing stage that a fixed-desk layout wasn't suitable for our style," explained the designers. "The idea of making a highly uniform workspace did not fit the staff members."

A long concrete bar runs throughout the middle of the office, while two more meeting rooms are situated in the back corner.

The Osaka office has been shortlisted for Interior of the Year at the Inside Awards 2015, along with an Australian hotel lobby staircase that has been enveloped in lengths of reclaimed timber.