Studio Farris Architects has integrated an office into a staircase made from stacked timber beams, and installed it inside a renovated barn in West Flanders, Belgium (+ slideshow).

To make the addition appear visually separate from the simple, gabled form of the barn, Antwerp-based Studio Farris developed a tower of wooden beams that resembles a giant version of wooden game Jenga.

The structure incorporates a staircase, mezzanine office, meeting space and bookshelves – tapping into the growing trend for staircases with additional functions.

"Instead of creating an extra floor in the existing volume that would take away the perception of the whole space, an autonomous furniture object was placed into the space, referring to the original farm and rural area," explained studio founder Giuseppe Farris.

"This extra object made out of stacked up wooden beams transforms the space into a very functional office. The wooden beams are piled up in such a way that different spaces arise," he added. 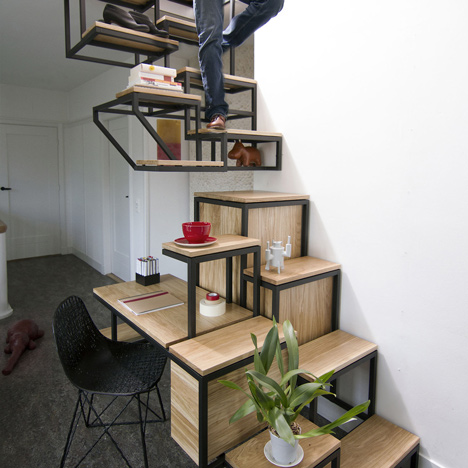 A platform on top of the stacked structure hosts an office with two workspaces, while cupboards and shelves are integrated into the overhangs of various steps.

Beneath the office mezzanine, there is a separate meeting area with floor-to-ceiling glazing that offers occupants views of the agricultural landscape.

Dutch design studio Mieke Meijer created a similar setup for a home in the The Hague by creating a suspended staircase with built-in shelving and a lower tread that doubles as a desk.

The project also involved a full renovation of the barn. As well as repairing the brick facade, the architects added a new interior layer, creating a "box in box" arrangement that improves the building's energy efficiency.

Small windows are located in the flanks of the building and a large skylight has been added to one side of the sloping roof to improve natural lighting.

Studio Farris Architects was founded by Italian architect Giuseppe Farris in 2008. Previous projects include a weathering steel extension to a library in Bruges, which features tiny perforations in its rusty orange cladding to allow light from the reading spaces within to filter through.

Photography is by Koen Van Damme.

More bookshelves that double as furniture