A large window inside the new showroom and offices of London watch brand Uniform Wares, designed by Feilden Fowles, offers visitors a glimpse at the watchmaking process (+ slideshow).

"We wanted the design of the space to communicate all aspects of the watchmaking process," studio co-founder Edmund Fowles told Dezeen.

"The ability to develop and prototype the watches in-house remains at the centre of their rigorous and highly crafted design approach," he said.

A full-height window looks into the watch-testing room from the minimally furnished showroom at the front of the space.

"The prototyping workshop is placed provocatively in the centre of the plan," said Fowles. "The crafting and assembly of the prototype watches, and the beauty of the equipment and precision tooling, is so visually engaging that we were keen to bring this feature of the space to the fore."

Beside the glazed panel, a dark timber partition pivots open to allow access to the design studio behind. A smaller door set within the wooden wall hinges open independently for moving between the two spaces more discreetly.

Towards the back of the office space are rows of large workstations and Tyde desks – designed by the Bouroullec brothers for Swiss furniture brand Vitra.

Fowles said that the furniture and fittings were selected to complement the clean and minimal aesthetic of the Uniform Wares brand.

Before the renovation of its new space, Uniform Wares brought in London design studio Manouvere to work on the branding direction. 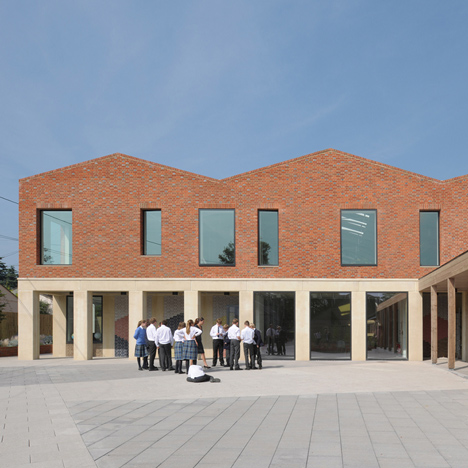 The changes they implemented – aimed at emphasising the brand's "quiet luxury" and appeal to both sexes – were also incorporated into the interior design by Feilden Fowles, which used a monochromatic material palette reminiscent of Uniform Wares' assembly facility in Switzerland.

Established by Fergus Feilden and Edmund Fowles in 2009, the east London practice has also designed a slate-covered house and a gabled brick school.

The collaboration between the studio and Uniform Wares was a family affair – Edmund Fowles and Uniform Wares co-founder Oliver Fowles are brothers. The duo also worked with a variety of different designers to complete the project.

"Collaboration was also a key driver throughout the design process, as Uniform Wares was keen to showcase other designers' work through the space," Edmund Fowles said.

"We designed in partnership with leading product designers," he added, listing the designs featured in the store as "a mirror designed in collaboration with Minimalux, a bureau and showroom display assets by Felix de Pass, leather accessories by Kuni Awai, and a lab coat by Adrien Sauvage that mimics the coats worn by watchmakers in the brand's Swiss partner factory."

Uniform Wares has been manufacturing watches since 2009, when Oliver Fowles set up the company alongside Patrick Bek. Every watch from the collection is designed in the London studio, and a selection is stocked at Dezeen Watch Store.