MVRDV co-founder Jacob van Rijs explains how the firm created an Amsterdam housing development where over 200 homes share one big "outdoor living room" in the latest movie from our exclusive series (+ movie).

Completed in 2007, the Parkrand Amsterdam apartment building is a block made up of five connected towers that together frame a communal garden for residents.

MVRDV raised the garden above ground level, allowing it to also function as a huge balcony overlooking the park beyond.

"How do you make a building that is both open and connecting and at the same time housing a lot of apartments?" asks van Rijs in the film.

"That was part of the plan, to make kind of one big block of, let's say, 225 units with one door and a collective interior space with views to the green," he explains. "So the scale of the building relates to the scale of the park – it's like a big mansion."

Giant plant pots are dotted around the space, along with elephant-shaped seats and playground equipment. Parts of the building bridge across overhead, creating a sense of shelter.

"You can say there are big, collective spaces where you can have a party or you can just play with your friends, and it also shows the possibilities of having a sort of space between public and private," says van Rijs. 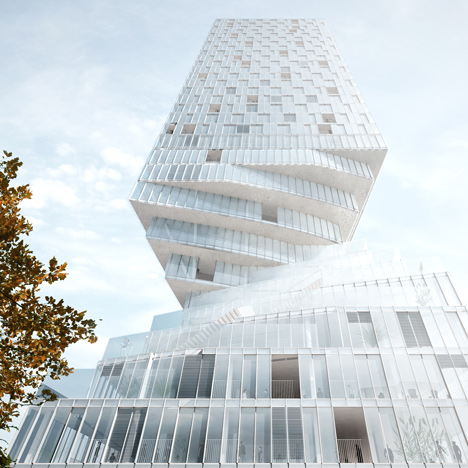 MVRDV plans skyscraper with a "curving waist" for Vienna

"The theme is that everything becomes larger, everything is enlarged, so a room becomes a space of eight storeys high and a flower pot becomes three metres high suddenly and the tiny, tiny elephant becomes suddenly a chair."

Different material finishes were selected for the outward and inward facing exterior walls. "On the outside, this kind of a rough, more rough crusty side – it's dark, more rough, with large balconies," continues the architect.

"Inside the block everything is white and that is to do with the light reflection, the effect of bouncing light helps to lighten the interiors. The bricks were specially made for this project. It gives the feeling of an internal space, an interior wallpaper and it becomes almost like an urban setting again."

Parkrand residents Ruud and Karina Valk describe the building as a preferable alternative to the simple stone houses found in countries like France.

"We have the feeling that we live outside of Amsterdam because you have beautiful trees, beautiful field – it's very nice to have this in Amsterdam," says Ruud. "It has something very special," adds Karina.

The building replaced three L-shaped slab blocks that stood on the site previously. MVRDV followed the project up with another Amsterdam housing project – a block on the docklands – as well as a mixed-use block in Lyon, France.

Van Rijs co-founded MVRDV in 1993 with partners Winy Maas and Nathalie de Vries. This is the fifth movie in a series profiling the firm's work, which also features a Paris office block with a hollow centre and a library contained within a glass pyramid.

Photography is by Rob 't Hart.