Installations formed by blending coloured lights, and a lamp based on jellyfish were produced by Dutch designer Dennis Parren for the Biennale Internationale Design Saint-Etienne 2015 (+ movie).

Three projects by Studio Dennis Parren were installed at the Puits Couriot Parc-musée de la Mine – an historic mining site that has been turned into a museum and public park in Saint-Etienne, central France.

Shown as part of the city's 9th biennial design earlier this year, all of the designs built on Parren's work with controlled RGB lighting – using red, blue and green LEDs to create multi-coloured patterns and shadows on surfaces where the light overlaps in different combinations.

He has previously produced a lamp and a lightbulb that cast coloured shadows using a similar technique.

For his Gradient installation, coloured lights and white light were projected at slightly different angles onto a surface of protruding white polystyrene shapes with round bases and a pair of slanted faces that joined along the top.

Each of the faceted forms was angled differently from its neighbours, so the blend of coloured light changed gradually across the floor as different surfaces picked up and reflected different projections.

The LEDs were slowly rotated so different overlaps of the RGB combinations were created on the surfaces, causing an effect that made the colours appear to flow across the spiky carpet.

"With Gradient we wanted to show how colours blend," explained Parren. "By carefully placing white expanded polystyrene shapes in a pattern under the RGB lights, we controlled how much light each shape reflects and which colours blend, resulting in a magical field of different coloured gradients." 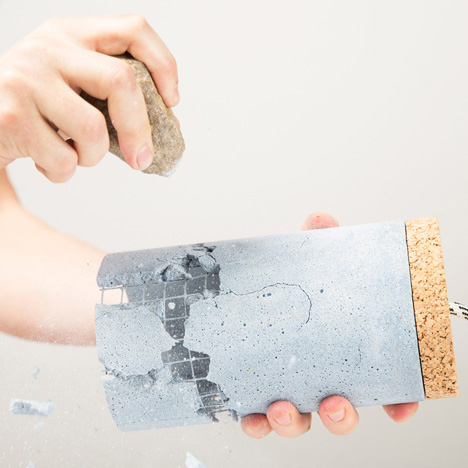 Dragos Motica's Slash Lamp is designed to be broken

"Gradient challenges you to stop and think about what you are actually looking at, as the eyes and mind try to make sense of what you are seeing," he added.

Parren used exactly the same lighting technique for another installation called Reflections, which replaced the polystyrene shapes with more angular and uneven forms made from the material.

Zigzagging ridges laid out horizontally in arrangements parallel and perpendicular to one another were designed to trap the coloured light and reflect it multiple times between the surfaces.

The amplified reflections formed colour gradients on each of the planes, which again shifted when the LEDs were rotated.

"With Reflections our goal was to show how light reflects by trapping it inside different shapes," said Parren.

"Catching the light and forcing it into a shape amplifies the reflection as it has nowhere to go. This results in a magical spectacle of bright colourful, almost fluorescent, light."

Finally, the designer produced a 3D-printed lamp with thin tendrils covered in strips of LEDs.

The Dotted Lamp uses mass-produced lighting strips that are usually hidden away and turns them into a feature.

"The Dotted Lamp uses the LED strip to show that it can be transformed into a delightful, simple and elegant lamp," Parren said. "In this case the design was inspired by the colourful and freely floating, dreamy jellyfish, a marvel of nature."

"Next to being light and colourful in its design, it is made to be a 'plug n play' lamp that uses a simple 3D-printed frame in which you can simply click the LED strip to make it work."

RGB colour blending has previously been used to create wallpapers and screens that show contrasting patterns under different lighting conditions.