Walls of frameless glazing offer uninterrupted views of the Golden Gate Bridge and San Francisco Bay from this 1970s California house, which has been reworked and extended by local studio Swatt Miers Architects (+ slideshow).

The golden-hued Garay Residence occupies a hilltop site in Tiburon – half an hour's drive from San Francisco – and enjoys a 270-degree view of the city and its surroundings.

It was originally built in the 1970s but its owners – a couple with two children – wanted to create a better connection with the spectacular setting, so they asked Swatt Miers Architects to rebuild and extend it.

"The family had lived in the house for a long time but it had become too small for them and worn out," architect Robert Swatt told Dezeen.

"It happens to be in one of the best settings in the Bay Area – on a hill overlooking San Francisco and the Golden Gate Bridge – so they wanted to create a larger home that befitted that setting."

The original single-storey house, which was just under 300 square metres, occupied the wing now used for the bedrooms, which is set back from the pool. 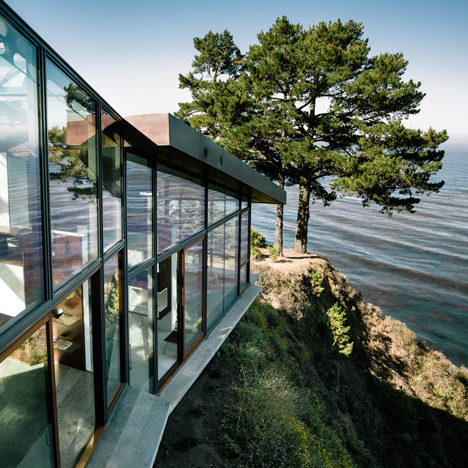 Fall House by Fougeron Architecture steps down a cliff side

The 185-square-metre extension protrudes towards the water, providing space for an open-plan kitchen, living and dining area. Beneath this, a new lower-ground level was also added for a media room, office and gym.

"The master-bedroom wing is essentially the footprint of what existed before, but nevertheless that wing has dramatically changed," said Swatt. "In the end, very little of the original house was used, although some of the original foundations are the same."

The entrance on the upper-ground level has walls made from warm-toned Jerusalem stone, custom-cut and imported from Israel, in order to shield the house from the gaze of nearby homes and save the view inside as a surprise.

"We didn't want to give everything away at the front door," said Swatt. "We also needed to limit glazing here to reduce the amount of light emitted from the home, which could affect neighbours' views at night."

Inside, rooms become gradually taller and more expansive, with a compressed entrance hall that leads to an open-plan living and dining area at the back.

This gradual revealing of the view can be seen in other cliff-side houses completed in recent years, including a copper-clad house with a stepped design in California, and a Vancouver house with a cantilevered dining room at the side.

"There is a sense of drama that is created with the opaque entrance, and the subsequent progression of spaces," said Swatt.

"It goes back to Frank Lloyd Wright – compressing the entrance so that visitors arrive in a small, low space, which then opens up both horizontally and vertically."

In addition to the open-plan living space, the upper-ground level of Garay Residence has bedrooms and bathrooms for the two children, two guests, and an au pair, plus a master suite for the parents overlooking the pool and the bay.

A limited palette of materials was repeated throughout the house, with Jerusalem stone continuing from outside to the walls in the living space, and vein-cut travertine used for the all the flooring, as well as the walls in the bathrooms.

The travertine flooring was also continued out to the terrace to make the internal and external spaces feel more like one, and roof overhangs were added above the glazing to subtly lead the eye outside, and provide shade inside.

The glass walls are made from 2.9-metre-tall panels, which were butt-jointed together to avoid the need for frames and to create unimpeded views. Solid exterior walls were also designed with cavities so that the sliding glass doors can retract fully out of sight when they are open.

The kitchen features walnut cabinets and has a raised roof with clerestory windows to bring daylight deeper into the house.

"We raised the roof as high as we could without blocking views of the neighbours," said Swatt. "It was the minimum we needed in order to add the clerestory windows, which were needed to bring light into the centre of the house."

A glass, stone and walnut staircase leads to the media room on the lower-ground level, which features sliding screens so the owners can block out light when watching films or playing games.

Outside, the garden was designed as a series of stepped levels, with a pool at the top that sits flush with the travertine decking, and a court for playing bocce – a form of boules – a few steps below.

"The slope of the site is very gradual, and the building reflects this," said Swatt. "The progression of spaces on the terraces is done in a subtle, controlled way."

Low-lying, drought-tolerant plants, including Bougainvillea and Agave, were added to thrive in the dry, rocky terrain, and also maintain views from the house.

"This is one of the few locations in the Bay Area where large trees are not prized, because they block views," added Swatt. "Slow-growing plants such as succulents and desert trees were more fitting."

Swatt Miers Architects is based in Emeryville, California. Other projects by the firm include three glass pavilions over the edge of a valley.

Photography is by Russell Abraham.