Rippled facades create curved balconies for the residents of this apartment building completed by NEXT Architects in the Chinese city of Fuzhou (+ slideshow).

The Fuzhou Shouxi building is situated within the historic centre of the Fujian Province's capital city. Local regulations dictating the amount of daylight required by neighbouring buildings informed the positioning and configuration of the building on its L-shaped site.

This prompted Dutch and Chinese firm NEXT Architects – which is also developing a bridge in Changsha based on a Möbius strip – to give the main block a U-shaped plan that wraps around a central courtyard.

"We had to go back to the typical Dutch, half-open U-shaped building block to be able to reach the required building area," NEXT Architects partner John van de Water told Dezeen.

"Then we had to develop this Dutch building typology for Chinese inhabitants by adapting the organisation of floor plans, the position of building cores and ensuring privacy in relation to neighbouring buildings," he said. 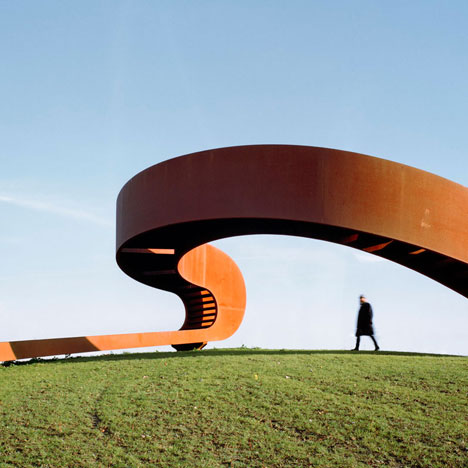 To avoid simply stacking the 400 apartments in a generic geometric volume, the project team developed a softer and more organic form by offsetting the balconies at each level to create the wavy facades.

"Manipulating the balconies around the building creates diversity and variety, which makes each apartment unique," said van de Water. "At the same time, the staggering of balconies creates a strong identity for the building as a whole."

The resulting sculpted form has been compared by local media to Shouxi seal stones – blocks of soap stone with identifying seals intricately carved into their bottom surfaces and often featuring decorative carvings around their upper edges.

"We consider this association a huge compliment, given the local significance of Shouxi-stones," van de Water added. "Still, it was never our objective to solely create a shape – the shape is a result of the architectural ambition to create variety."

The undulating balconies continue around three sides of the building, while an opening on the fourth facade extends into a large atrium. A glass roof allows daylight to filter down to the apartments and balconies overlooking this communal area, which incorporates a water feature and a wavy red bench.

A shorter building that annexes the main block contains further apartments on its upper storeys and commercial spaces on the ground and first floors. Both buildings feature rooftop gardens for use by the occupants.

LED lighting illuminates the fritted glass railings around the edges of the balconies and is programmed to replicate the intensity of moonlight on normal evenings.

The entire building can be lit up in red on special occasions like national holidays, as the colour is associated with good luck in China, while cool hues are typically applied during summer and warmer tones in winter.

NEXT Architects opened its Chinese office in 2005. Other projects by the firm include a hilltop staircase that creates the illusion of an endless walkway and a bridge that splits into two.