Converse has released a movie explaining the changes it has made to its classic Chuck Taylor All Star basketball sneakers, which have been redesigned for the first time in over 80 years.

The updates are the first to be made since Taylor – the basketball player who helped to refine the original designs – had his name added to the ankle patch in 1932. 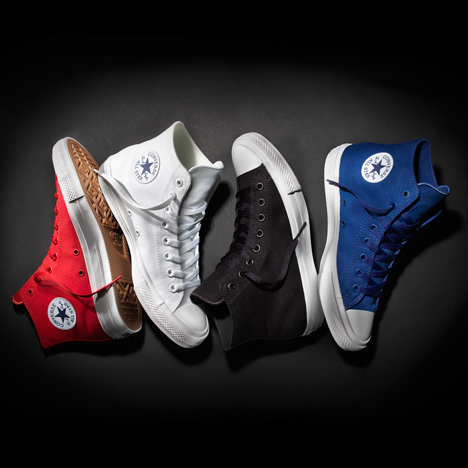 In the brand's short movie, the shoe is exploded to show the new features incorporated into the trainers.

It points out the sole liner made from Nike's Lunarlon foam material, which has been added to cushion the wearer's feet and provide arch support.

Close ups of the padded non-slip tongue and micro suede lining on the insides of the trainers can also be seen, along with the upgraded canvas on the exterior.

The Chuck Taylor All Star II sneakers with be available in high-top and low-cut versions, and in black, red, blue and all-white from 28 July 2015. Find out more about the shoes in our previous story »

It's been a big month for trainer news. Zaha Hadid and Pharrell Williams teamed up to design a pair of shell toes for Adidas, while the German brand presented a prototype shoe with an upper made entirely from plastic salvaged from the ocean.