Sydney design studio Sibling has installed a grid system based on 3D rendering programmes to define the working areas within the new Australian headquarters for digital animation studio Squint/Opera (+ slideshow).

Situated in the Melbourne suburb of Richmond, the offices take inspiration from the animated film and visualisation work produced by Squint/Opera, which also has branches in London, Dubai and São Paulo.

The studio's projects include a series of images depicting imaginary scenes of London in 2090, a short film that illustrates proposals for urban improvements in Abu Dhabi until 2030, and a clip to publicise a campaign to rebuild Powell & Moya's Skylon landmark.

"The new studio allowed for an opportunity to explore the relationship between a physical space and its rendered simulacra," project architect Jane Caught told Dezeen. "This was our inspiration, as it is a condition familiar to Squint/Opera, who trade in the imagery of imagined futures."

"The mesh references the invisible wireframe of XYZ coordinates with which designers use to visualise space in 3D modelling programs," Caught said. 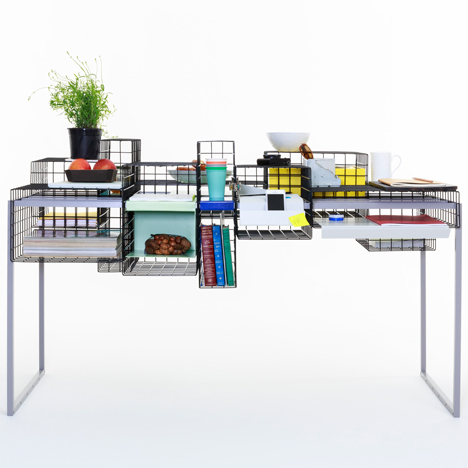 As well as defining work spaces, the white-coated steel mesh grid is also designed to create a level of privacy while allowing views through the office.

"The new office uses the wireframe space of modelling software as real-time infrastructure through the installation of custom-steel grid-mesh," said Caught. "Work spaces are carved out of this matrix to provide a sense of spatial division while retaining views across the entire studio."

Custom-made screens, hooks and plant containers attach to the bars and allow staff members to personalise the areas surrounding their desks.

An informal meeting space with seating covered in sky-print fabric is situated by the large windows and a further presentation room is located at the back of the office.

At the rear of the presentation area, a hydroponic planting system – which doesn't require soil – shines magenta lighting onto the wall, referencing the colour used in Squint/Opera's branding.

"The LED hydroponic system is a pilot project for both Sibling and Squint/Opera," said Caught. "We inserted a system typically utilised in an industrial environment for a workplace context."

Sibling – a collective that works across architecture, urbanism, cultural analysis and graphic design– has previously created a cage that blocks Wi-Fi signals, a boutique featuring copper clothes rails and shoes that transform into a tent.

Photography is by Christine Francis.