Colombo and Serboli Architects and Margherita Serboli Arquitectura has renovated an apartment within an early 1900's building – aiming to "retrieve its Art Nouveau essence" through the restoration and recreation of original features (+ slideshow).

Situated in the Eixample district, the studios were tasked with creating a space suitable for an Italian family to use as a holiday home.

"Their wish was to have three double bedrooms," explained Colombo and Serboli Architects, also known as CaSA. "And they wanted a home that would highlight and underline the early 1900s detailing of the building, through a design that uses a contemporary language."

Geometric tiles on the floor within the living room were added to reinterpret what the architects describe as one of the most characteristic elements of Art Nouveau apartments in Barcelona. 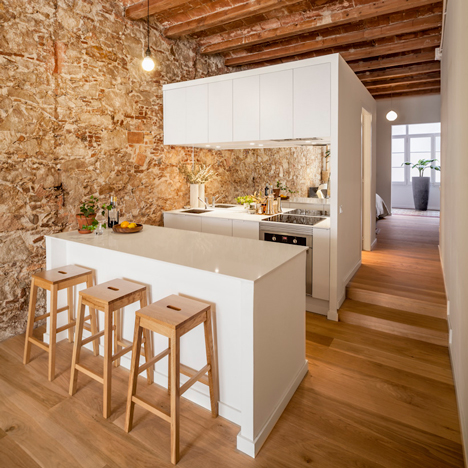 These historic tiles feature in recent projects by Nook Architects and Vora Arquitectura.

"The buildings in the Eixample area of Barcelona were built in the early 20th century and are mainly Art Nouveau," the architects told Dezeen. "Sometimes if you are lucky you find colourful encaustic cement tiles, but in this case they were gone – so we decided to put in new ones."

To highlight this new flooring, the architects chose to use simple colours and materials throughout the Tyche Apartment.

"The coloured elements were also important," they said. "They are all used in very contemporary language, and are not trying to mimic Art Nouveau atmospheres, only suggesting subtly."

Catalan vaults – a traditional Spanish ceiling style where plain bricks are laid in rows across gently curved forms to create a series of smooth low ceiling arches – having been exposed after having been hidden underneath a false ceiling.

The master bedroom and bathroom are situated at the far end of the apartment, in a space previously housing a kitchen, and are painted in a yellow-orange colour to differentiate the area from the rest of the property.

Part of the old corridor were opened up to create a bigger kitchen-living space, while two bedrooms within a light pink-coloured volume are joined onto the second wall.

Original wooden window frames have been painted pink and green, and a pine-clad block disguises the main bathroom at the end of the corridor.

The previous layout of the building was determined by three load-bearing walls that separated the space into a number of small areas.

Aiming to open up the apartment, the architects created "transversal axes" around which the space is organised. The first is the hallway, which frames the space around the living room and kitchen, and the second is a pair of bedrooms that separate the living space from the master bedroom.

"The original layout wasted considerable space and was poorly orientated,” the architects said. “Its longitudinal distribution, forced by the transversal bearing walls, resulted in many densely separated small spaces that were spared along a long corridor that isolated the two ends of the apartment."

Furniture that corresponds to the colour theme includes lighting by Normann Copenhagen and kitchen stools by Danish brand Hay.

"White metal elements and pastel colours were picked, along with a few grey objects, to emphasise even more colours and give life to the environment," they said.

CaSA has previously renovated another Barcelona holiday apartment, continuing a terracotta balcony through to the inside of the property, while Spanish studio Laboratory for Architecture also uncovered the Catalan vaulted-ceiling of an apartment in the city.

Photography is by Roberto Ruiz