The project, named 7 Cool Architects, debuted at Clerkenwell Design Week earlier this year and will be presented at Fritz Hansen's showroom during London Design Festival 2015 in September.

Formed from two continuous steel rods, the sculptural base of Zaha Hadid's bright green design "sweeps down to the ground and reaches up to embrace the undulating shape of the iconic plywood seat," according to the studio.

The shapes were influenced by the organic and fluid forms that typify her buildings, such as the Heydar Aliyev Center in Baku and the Dongdaemun Design Plaza in Seoul.

Bjarke Ingels' firm BIG has repeated the curved form of the seat as a vertical stack – from its original height right down to floor level. The seat layers gradually flatten out towards the bottom, and are connected by four springs in the place of legs.

Oslo practice Snøhetta removed the chair's chromed-steel legs and placed the Series 7 seat among plants and bark that form a small garden.

"Since we set the chair free, we felt that the chair could be used for a large number of our projects," they said. "We try to maintain a good link to the outdoors throughout all our work and that's why an outdoor chair is perfect for our projects."

The Yin and Yang chair by Jean Nouvel Design comprises two connected chairs – side by side but facing in opposite directions – decorated with the ancient black and white Chinese symbols of duality.

"I see no difference between when I design a chair and when I imagine a building," said French architect Jean Nouvel, who recently unveiled new images of his skyscraper in New York.

"For every challenge posed, I seek the 'elementary' object whose finished form corresponds to an idea," he added. "It's always a fitting and unique answer that bears witness, culturally and technically, to our times and to our civilisation." 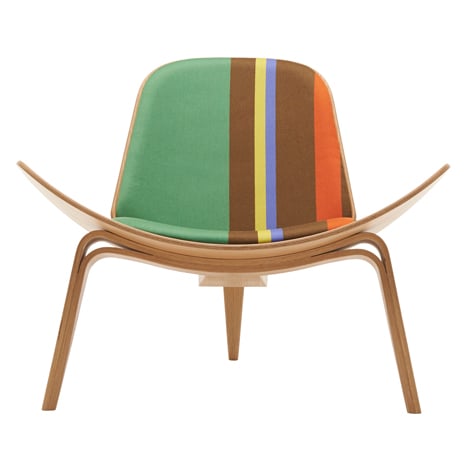 Chinese studio Neri & Hu's concept is similar in that two chairs face in opposite directions. In this case they are connected by one S-shaped arm, which wraps around them both and supports a small table between the two.

It was influenced by the studio's Waterhouse project – a 19-room boutique hotel built into a 1930s Japanese Army headquarters in Shanghai – and designed for communal spaces.

"The idea of a replica, a double, a variation, a re-edition, hinges on the duality between the original and the re-design," said the designers. "Our take on this project is to embrace this exact idea of duality and create an actual 'double'. The double as one set is an emphasis on the communal aspect of sitting."

Uruguayan architects Carlos Ott and Carlos Ponce de León designed a version of the Series 7 for a restaurant in Celebra, the flagship building of technological campus Zonamerica that they designed in Montevideo.

This is reflected in the camouflage-effect upholstery in multiple shades of green. "The upholstery climbs and settles peacefully on the shell of the chair," said the designers. "The curved lines which compose the foundation of the different areas in the garden are mimicked and adapted to the anatomy of the chair."

Finally, Japanese architecture studio Jun Igarashi's iteration of the Series 7 replaces the original laminated moulded sliced veneer with oriented strand board (OSB) – a type of chipboard made of compressed wooden flakes. The legs and edges of the chair are picked out in the colour most prominent in the timber flakes, which were formed, in this case, from reclaimed scrap wood sourced from earthquake disasters.

This project is not the first time the Series 7 chair has been given a new look. In 2009, Fritz Hansen collaborated with designers Maarten Baas, Arik Levy, Fabio Novembre, Jaime Hayon, Sebastian Bergne, Nendo and Autoban to release the chair in seven new colours – and Japanese designer Hironori Tsukue has even added a set of rockers.