Dezeen and MINI Frontiers: in this movie filmed at the Royal College of Art, graduate Morten Grønning explains how he adapted an electric kitchen knife to make a prototype glove for carving hard materials.

Grønning's Happaratus glove features a pair of abrasive pads on its fingertips, which move back and forth in a reciprocating motion, enabling the wearer to sculpt materials like wood or stone with their hands.

"It's a project that explores a new way of creating," says Grønning, who graduated from the RCA's Innovation Design Engineering course. "I wanted to explore how we can use our hands to create directly in hard materials."

To make his first prototype, Grønning took the mechanism from an electric carving knife. 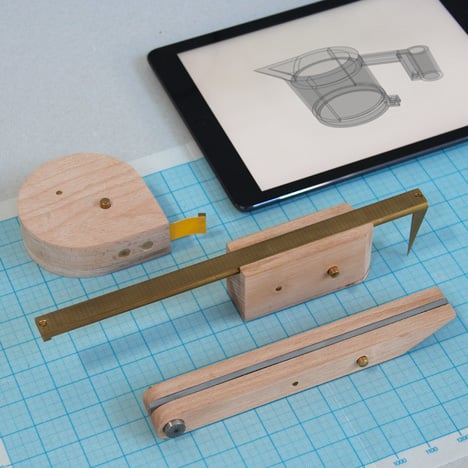 Boundaries between analogue and digital tools "are becoming irrelevant"

"I needed a specific motion to power this tool and an electric kitchen knife was very well suited to do this," he explains. "So I ended up strapping one of those to my wrists and using that to power the tool for the first prototypes."

To demonstrate how the tool could be used, Grønning gave the prototype to a number of wood and stone sculptors to test it out. He claims the feedback was very positive.

"The whole prototyping phase was about finding a way to build a tool so I could give them out and have people test it," he explains. "The main feedback was that, as you are creating a curve, you know the shape through the haptic feedback. So you are understanding the shape as you make it."

Grønning has since built a series of more refined prototypes, which all feature a pair of reciprocating sandpaper pads that are able to sculpt materials like balsa wood, sandstone and plaster.

However, he hopes to develop a version of the glove with much tougher interchangeable blades. These would be connected to an electric motor on the back of the glove via flexible shafts along the fingers, granting the wearer full dexterity.

"In the real product, the tool tips would be made from tungsten carbide or hard steels that could really dig into materials and last a really long time," he explains. "We could also have tool tips just for sanding and surface work. We could have some very fine and detailed ones for intricate work."

Grønning hopes that with further development, he'll be able to produce a much more tactile replacement for conventional power tools.

"For an artisan it's really desirable to get as close to the material as possible," he says. "With this tool you cannot get any closer."

This movie was filmed at the Royal College of Art in London. Additional video footage is courtesy of Morten Grønning.

The music used in the movie is a track by UK producer 800xL.