Shimmering and billowing garments by Chinese fashion designer Rui Xu will be presented in an exhibition at London's Royal College of Art.

From Xuan to Blindness, which opens 21 August 2015, includes a collection of Xu's designs that are a cross between Chinese hanfu robes and the oversized couture pieces from the contemporary Parisian fashion houses.

Using the non-structural shapes of the traditional apparel, she borrows tailoring details and western-style collars to update the looks.

"My ambition is to revive the spirit of the ancient Chinese literati society in today's fashion," said Xu. "I want to bring the loftiness and luxury of Chinese noblemen and noblewomen and empower the spiritual freedom to the wearer of my garments."

Her influences also include the philosophies of "naturalness" and "nonaction" found in Taoism – a religious tradition of Chinese origin that emphasises living in harmony with the universe's natural order.

Many of the items are plated with metal, which is burnt to create iridescent patterns across the cloth, while others are made from crinkled paper. 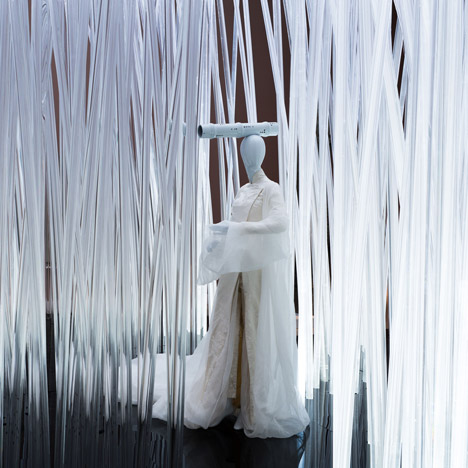 Xu studied fashion at Beijing's Central Academy of Fine Arts and is now undertaking a research programme at the RCA. The designer has also opened her own studio in London's South Kensington, close to the RCA's campus.

The exhibition is curated by Claire Pajaczkowska, senior research tutor in fashion and textiles at the institution.

In the first section, garments on show include a skirt with four trouser legs from the designer's Xiang Wang Yi series that aims to contrast with strict western tailoring.

The second part includes Xu's composite artworks, in which she has captured the unusual fabrics she chooses in a series of images that look like fantasy landscapes.

Xu is one of many emerging Chinese fashion designers and houses, such as Laurence Xu, Shang-Xia, Zhang Huishan and Pei Guo.

The exhibition will run until 30 August 2015 in the Upper Gulbenkian Gallery at the RCA's Kensington Gore campus.

During the opening event, visitors will be presented with a 10-minute-long performance directed by Madaleine Trigg from the Royal Central School of Speech and Drama.

Ten artists wearing Xu's paper dresses will portray the Chinese philosophy of Xuan – which is linked to Taoism and lends its name to the exhibition title.