"At heart it's a pretty simple story of Satan's fall from heaven and subsequent journey to corrupt Earth," Alasdair Brotherston told Dezeen. "It just so happens that he has to travel through some quite bizarre places to get there."

The black and white film begins with Satan's descent from heaven, following his fall through the clouds. Transforming into a crow along the way, the figure is plunged into a burning lake.

The bird takes flight over a landscape populated with nightmarish individuals, inspired by scenes from Milton's 17th-century narrative. 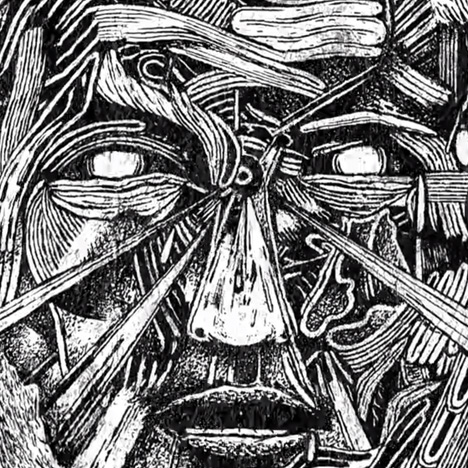 After landing in a nest of eggs, the crow feeds three newly hatched baby snakes before taking off. It then flies across the scene of a man transforming into a tree.

As mountains appear and volcanoes erupt, the film's action concludes on a shot of earth from outer space.

The pair were approached to work on the project as a result of their work on the animation for Coldplay's album Ghost Stories.

Briefed to create a sequence that would reference 19th-century French artist Gustave Doré's complex etchings, Alasdair + Jock worked with a team of 12 animators, art workers and compositors to craft the video.

"When you look at Dore's illustrations and strip away the layers of etched details, the base drawings are quite graphic and stylised," said Brotherston. "We approached the animation the same way by starting with a stylised base and then adding layers of mark making and texture to add richness and complexity to the image."

Jock Mooney put together large-scale artworks for background scenes, while Brotherston assembled elements in the composite.

"We had decided when we storyboarded it that we wanted some big cinematic camera moves and this involved creating huge bits of highly detailed artwork," he said. "In a couple of scenes we were definitely right at the limit of what our machines could process."

Symbolism also features heavily, and the film is peppered with obscure references to specific details from Milton's text, such as the three baby snakes.

"I think most people when they first see it are quite impressed by the rather relentless action and detail," Jock Mooney told Dezeen. "That is most certainly born out of a mutual appreciation for something like Akira. We are masochists."

Rattle That Lock features on Gilmour's forthcoming album of the same name, set for release on 18 September 2015.