The RV1 Carbon Chair has large indents in its form on the top and bottom, making it possible to switch between the two alternative seating positions by flipping the design over.

The chair is made from carbon fibre and resin, and is available with a white or tinted black high-gloss natural-carbon finish. 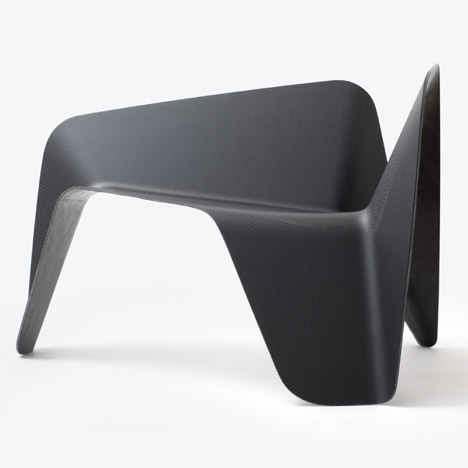 Its form was inspired by a visit to a wind tunnel, where the designer watched a jet being tested.

"I tried to visualise a chair that flowed harmoniously into the background environment," Lamba told Dezeen. "This led to the continuous shape."

A desire for the chair to be barely visible from a side profile led to the material choice of carbon fibre, due to its high strength-to-weight ratio.

"It also allowed ergonomic flex while maintaining structural integrity," added the designer. "Stress points were calculated digitally and allow the chair to flex lightly depending on the seating position chosen."

Lamba claims that the chair is the "world's first one-piece multi-position chair," explaining that it is made using "a pioneering infusion process developed specifically for the purpose".

The process starts with wrapping carbon fibre around a positive mould of the chair and inserting into an airtight bag so it can be placed into a vacuum.

Resin is drawn into the form through a network of pipes and a honeycomb surface layer. The whole thing is then heat-cured and released from the mould.

"One of the main challenges of the continuous shape is that only male moulds can be used, thus rendering traditional resin-infusion methods useless," said the designer. The piece is sanded and trimmed before the outer colour is applied.

Other one-piece chairs that offer a single seating position include Jasper Morrison's 1999 injection-moulded polypropylene Air-Chair for Magis; Ronen Kadushin's Hack Chair made of a single sheet of metal; and Patrick Jouin's Solid C2 – the first item of furniture to be 3D-printed in one piece.

According to Lamba, the RV1 features both a "social, ergonomic and upright" position and a "reclined, relaxed" position suited to longer seating periods.

"I was visualising a contemporary environment, which would require multiple seating positions yet would need to maintain a very simple aesthetic," said the designer, who has also created a limited-edition stainless steel version of the chair.

Carbon fibre has been used to create a number of chairs, including a circular coloured seat and a design composed of thin interlinked strands. Marcel Wanders has also created an ultra-lightweight carbon fibre chair formed around party balloons.