Italian studio Carlo Ratti Associati and architect Italo Rota have designed a museum dedicated to carbon fibre, which will be partially made from the material.

Created for carbon-fibre manufacturers MAE, the museum will feature objects from the company's 53-year history that show how the ultra-strong, lightweight material is used across the automotive, cycling and fashion industries, among others.

According to Carlo Ratti Associati (CRA), the MAE Museum will be the world's largest archive of acrylic fibre technologies.

It will be situated in a renovated warehouse in Piacenza, Italy, next door to a new MAE pilot plant, and will have an interior largely made of carbon fibre, including some sections made with recycled fibre.

The carbon-fibre elements will include an entrance door that "opens like a curtain", while another feature of the museum will be its heavy use of robots in the exhibition experience.

Its first room will be a robotic archive warehouse, where mechanical arms move along the walls to extract historical photos and documents and place them on a raised viewing platform for the viewer's perusal.

Elsewhere in the museum, visitors will be able to observe the process through which acrylic fibre is transformed into carbon fibre and see objects demonstrating its contemporary use.

In a black room filled with immersive installations, they will be able to interact with cutting-edge prototypes and objects that use the material more experimentally.

CRA founder Carlo Ratti said that the MAE Museum project was an opportunity to explore the ecological potential of the material through such actions as using recycled fibre. 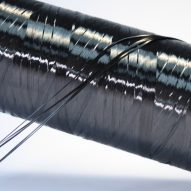 "The MAE museum celebrates a defining material of modernity, by focusing on its new circular frontier and envisioning new applications for its use."

Currently, carbon fibre is made with fossil fuels through a highly polluting process. However, its strength and lightness have made it the standard for aircraft, and it is also sometimes used in cars, bicycles and tennis racquets.

Bio-based and recycled carbon fibre are now being explored but have their limitations.

MAE first produced synthetic fibres for clothing, which became popular after world war two in Europe, before moving on to carbon fibre.

The connection to clothing remains — similar synthetic fibres are put through complex chemical processes to turn them into carbon fibre.

Rota and CRA have undertaken a number of recent collaborations, including creating a shipping container intensive care unit for a Turin hospital and the MEET centre for digital culture in Milan.