Pomo summer: Memphis Group designer Martine Bedin's Super Lamp can be trailed along like a dog on a leash, demonstrating the collective's playful style. This next article in our summer series on Postmodernism tells the story behind one of Memphis' most comical products.

Bedin was a founding member of Memphis in the 1980s, and one of the younger designers that found fame through the group, which has become closely associated with Postmodernism.

Memphis pioneer Ettore Sottsass, took the French designer under his wing while she was still a student and helped turn her whimsical wheeled designs into realised products.

Produced as part of the group's first exhibition, the Super Lamp was described by the designer as "like a small dog that I could carry with me". With exposed light bulbs splayed out from its arced back like the armour of a stegosaurus and four wheels that allowed it to be dragged along, the lamp – at Bedin's admission – is among "the more funny ones" in the group's debut collection from 1981.

The bold forms and bright colours championed by the Memphis Group – and present in the Super Lamp – drew a large amount of media attention and a very mixed response from the public.

"We thought we were producing products that made people's lives better, society happier, which of course didn't happen," Sottsass told the New York Times in 2002. "But we did open up the possibilities of design."

"It was like opening a window to reveal a new landscape. Why should a table have four identical legs? Why should laminate veneer be only for the kitchen and bathroom and not for a luxurious living room?"

Bedin was born in Bordeaux in 1957 and grew up in Corsica. She studied architecture in Paris before receiving a scholarship to go to Florence in 1978, where she met the members of the Radical Architecture movement. These included the founders of Studio Alchimia, Superstudio and Archizoom Associati, who were focused on deconstructing classical architecture into new forms. 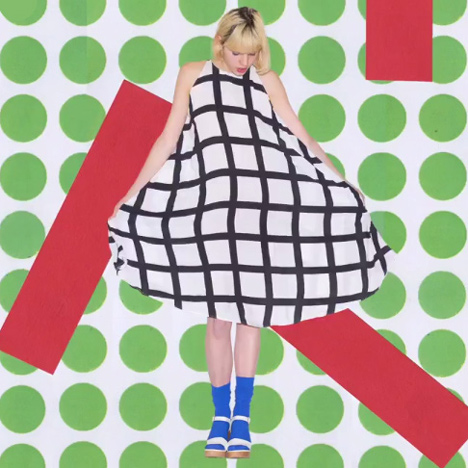 A shift in the avant-garde from the minimal aesthetic of Modernism, this proved highly influential to 20-year-old Bedin, who looked up to Radical Architecture's key figures like Alessandro Mendini and Andrea Branzi.

"That kind of vocabulary was very new to me, but in a way very close to me," she told Dezeen. "I'm a Mediterranean girl, I like colours, and probably something touched me. It was something I could work with easily."

Superstudio founder Adolfo Natalini invited her to Milan in 1979, when she was introduced to designers Michele De Lucchi and Ettore Sottsass – with whom she would go on to found the Memphis Group.

When she returned to Paris, these influences in her work angered her teachers, but she continued to travel to and from Italy on the night train to learn from the architects and designers she had met there. "That's how I began to design pieces that I could take with me," she said.

Sottsass and his wife Barbara Radice also visited Bedin in Paris, and spotted the design for the Super Lamp while flicking through her sketch book.

"He came to my house and he looked at my book," said Bedin. "He said: 'Wow, I love that lamp, we should make it'. And I ripped out the page of my book and I gave to him, and I said: 'Sign it. That's the only way for that lamp to exist because I'm not ready'. And he said: 'Wait wait wait, that's not how we do it'."

Sottsass invited her to work in his studio, so Bedin moved to Milan where she turned the design into a realised product under her own name.

She spent three years during the early 1980s at Sottsass' studio, working on her own designs while writing for a French magazine to cover her living costs.

"We were funding our economy to keep spending time all together with Ettore," said Bedin. "Every one of us had a second job to make the money and give us time for our success."

"The thing was that it was much more interesting to be with him than to work on his projects."

Born during an alcohol-fuelled meeting at Sottsass' apartment, the Memphis Group intended to "create a chaos in the co-ordination of style" and Bedin set about realising her mobile furniture and lighting designs as part of this. 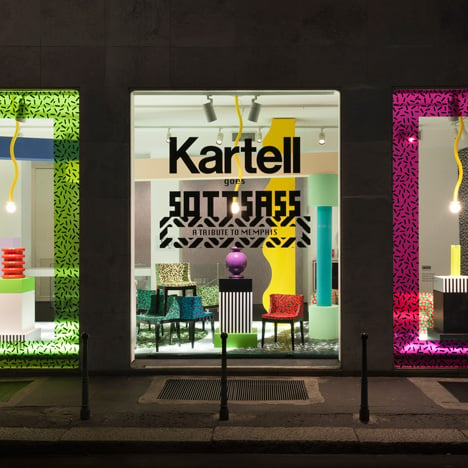 "We were always discussing the possibilities of new furniture, furniture that could move," said Bedin. "I was designing everything on wheels at this time. There are so many drawings in the scrapbook with wheels: furniture, socks, many things."

The prototype for the Super Lamp – currently part of the permanent collection at London's V&A museum – has four small industrial wheels and a chassis made from pressed steel, lacquered in bright blue.

When put into production, the steel was swapped for fibreglass, which is produced in two pieces and glued along the middle.

The prominent bulbs, mounted into fittings that each carry a different colour, have gone through many iterations due to changes in regulations. After years of what Bedin described as "bad light", new technology has enabled the creation of energy-efficient bulbs that replicate the intended effect of the originals.

The Super Lamp was one of a variety of lighting designs that Bedin created for Memphis. Her later Western, Holiday and Charleston designs – all floor lamps – carry the same graphical simplicity, but never gained the same attention.

"I first spotted this lamp in a store in South Kensington when I came to London to study in the late 1980s," said designer Michael Anastassiades in a roundup of his favourite designs for Icon. "Years later, I managed to afford it. It is so different to anything I design, yet it makes me smile every time."

After several years, Memphis members began to lose their enthusiasm as they had to spend more time on finance, production and showroom liaisons than on design.

"It was like a real job and not avant-garde any more," said Bedin. "Very soon we got very bored with that."

Sottsass left Memphis in 1985. Bedin eventually moved back to France, where she still designs geometric and abstract furniture, ceramics and homeware with her own studio.

Bedin, like many other architects and designers, disassociates herself from the Postmodern label and argues that Memphis was never part of the movement, because its members did not use historical references in their work.

"It was very clear that we took the distance far from Postmodernism," she said, citing Radice's book about the group to back up her stance. "She writes that Memphis was not Postmodernism. We were taking ideas and items from a very new point of view."

Despite this, a host of Memphis pieces were included in the V&A's 2011 Postmodernism exhibition and are listed within curator Glenn Adamson's Dezeen guide to the movement.

Design critic Justin McGuirk described Memphis as "Postmodernism's boldest force" in an article for the Guardian, and Denise Scott Brown – who helped to pioneer Postmodernism in architecture with husband Robert Venturi – also considers Memphis to have close ties with their work. 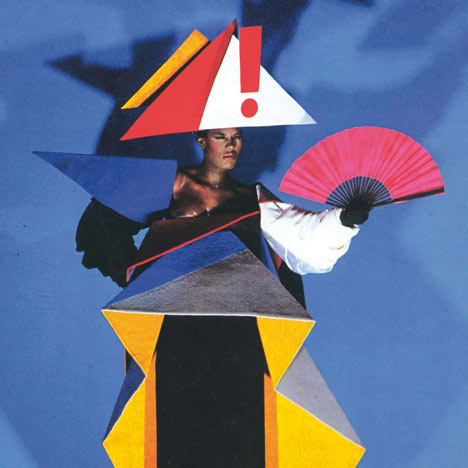 "I think there is a spirit and a seriousness around [Memphis]," she told Dezeen in an exclusive interview. "I think of those people as pretty talented and pretty interesting."

The Super Lamp is still produced and sold through the Memphis Milano gallery, and has remained one of Memphis' most recognisable pieces. Bedin attributes its ongoing appeal to its relatively small size and low price. Its pet-like attributes allow a more personal connection to the product than some of the more abstract designs from the group.

"I can't say myself whether it's an icon or not," said Bedin. "Anyway, it was not designed for that purpose."

Images are courtesy of Martine Bedin, unless stated otherwise.