US firm Ross Barney Architects has completed a transit station for an emerging Chicago neighbourhood, featuring a tubular structure made of stainless steel and polycarbonate panels (+ slideshow).

The Cermak-McCormick Place station is located in the Near South Side district and is a short walk from McCormick Place, America's largest convention centre. The station is on a portion of the rapid transit Green Line that has been without service since 1977.

The structure consists of a perforated stainless steel and polycarbonate tube that covers the elevated rail line and a central platform. The project did not allow for track realignment, which forced the architects to create a relatively narrow platform that measures 15 feet in width (4.5 metres).

The station traverses Cermak Road, a major thoroughfare, and offers views of the convention centre, Chinatown and the Chicago skyline.

In addition to providing views and ushering in natural light, the tube structure protects passengers from wind and rain and is easy to identify from a distance, according to Ross Barney Architects, which is based in Chicago.

"The location of the station, with its sweeping views of the skyline, along with its form that provides a sense of enclosure for the elevated tracks, creates both a literal and metaphorical gateway for the large population of Chicago newcomers," said the firm. 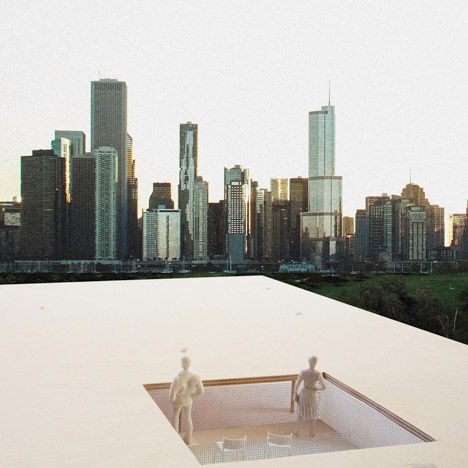 "Emblematic of a contemporary vision for urban connectivity, the station asserts itself as part of a larger context within the City of Chicago."

The architects utilised four perforation patterns, none of them with more than a 23 per cent open area.

"Counter-intuitively, perforated materials deflect air if the percentage of 'open area' is low," explained the firm. "The open area percentages used at the station are effective for usual wind speeds in Chicago."

Often referred to as the Windy City, Chicago has an average annual wind speed of 10.3 miles per hour (16.5 kilometres per hour).

The facility is located in a former industrial area that has been without an L station – the name of Chicago's elevated rail system – since 1977, when an older facility built between 1892 and 1907 was demolished due to a lack of riders in the neighbourhood.

In the past decade, however, the district has witnessed a development boom and is now dotted with residential buildings and hotels. A 10,000-seat sports arena is slated to be constructed in the area.

"As the communities transitioned from light industrial to residential, the need for greater connectivity arose," said the firm, citing the impetus for the station.

The architects faced many challenges during the project, including a constricted site, short construction schedule, modest budget and no suspension of service.

Other recent transit projects include the Fulton Center in New York by Grimshaw Architects and a proposed multi-modal hub by BIG in Västerås, one of Sweden's largest cities.

Photography is by Kate Joyce Studios.