StudioMilou has merged Singapore's former city hall and courthouse to create a new national art gallery, with a sculptural entrance sheltered by a curving canopy made from golden filigree and glass (+ slideshow).

StudioMilou worked with local firm CPG Consultants to transform the city's Supreme Court building and City Hall into the National Gallery Singapore, a public institution hosting collections of Southeast Asian art. StudioMilou's design was selected from 111 submissions to an international competition for the gallery.

A concave canopy made from gold filigree metal and glass structure hangs over the entrance. The host buildings feature Ionic-style columns, an oxidised copper tower and pale grey stonework.

The glass and metalwork continues onto the roof of the gallery and is supported by a series of tree-like structures made from steel.

The perforations in the flat roof create a dappled light effect across the gallery's floor while helping to screen the artworks and visitors from harsh sunlight.

"I wanted the roof to give rise to accessible analogies for the public, such as the fibres of natural weaves and designs; rattan for example, or perhaps ikat – beautiful things conjured through a stunning design gesture," said StudioMilou founder Jean-François Milou.

Gardens, water features and a cafe set on the roof of the gallery provide visitors with views into the building and across the city to the sea beyond. 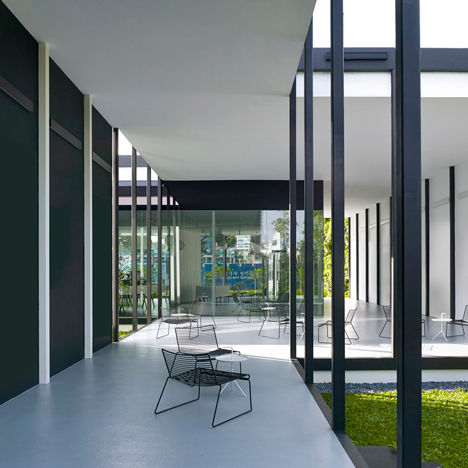 Black and White Gallery by CarverHaggard is based on colonial architecture

The architects preserved original details including tiled floors, windows with portico mouldings and canted timber ceilings, while new elements have a limited colour palette to help unify the 64,000 square metres of gallery space contained within the two buildings.

CPG Consultants, which advised on the refurbishment works, has previously worked on several large-scale restoration projects in the city, including the conversion of a school into the Singapore Art Museum and the renovation of the 100-year-old National Museum of Singapore.

"This is by far the most challenging and fulfilling project in our efforts to rejuvenate historic buildings from the colonial era," said Lee Soo Khoong of CPG Consultants. "Going through it feels like all our experiences working on earlier conservation projects were a lead up to the creation of this world-class landmark."

Walkways crisscross an atrium in the centre of the site to connect galleries on either side, while a basement concourse unites the two buildings from below.

The National Gallery Singapore is due to open in November 2015, following a succession of high-profile cultural buildings recently opened across the city including a cluster of parsnip-shaped university buildings by British designer Thomas Heatherwick.

Construction is also now underway on Moshe Safdie's Jewel Changi Airport in the city, which will feature a greenhouse-like terminal building with a 40-metre-high waterfall in an attempt to "reinvent what airports are all about".

Photography is by Fernando Javier Urquijo.