American studio CHA:COL has incorporated modified IKEA products into a unit that serves as an office and apartment for two visual artists in Los Angeles.

Called Toy Loft, the 1,465-square-foot (135 square metre) unit is located on the top floor of a residential building near the city's arts district. Completed in 1924, the building was formerly a warehouse and toy factory, and was converted into lofts in 2006.

The clients – a husband and wife, both visual artists – purchased a single-level unit in the building and commissioned CHA:COL to remodel it. The former occupant, an artist, had adorned the walls with graffiti and painted the doors and ceiling powder blue.

"Our proposal involved a 'super compaction' approach," said the firm. "Into this single-storey loft, we dropped in a compressed structure designed to contain everything they required."

The architects used light-gauge steel framing, medium-density fibreboard and site-cut plywood for the new structure. They also retained the industrial character of the space, which features concrete columns, a polished concrete floor and exposed ductwork. 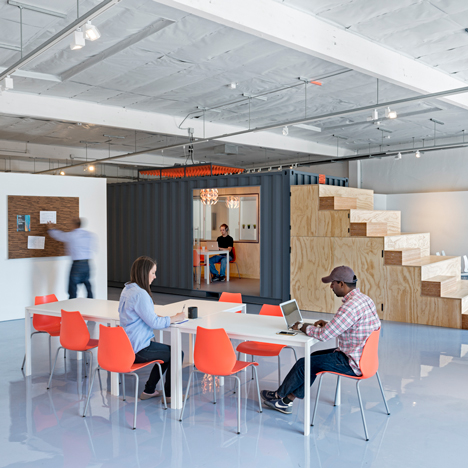 An "attic nook" serves as a bedroom, and below it, the architects created a lounge. "The lower area is also designed for sleeping, with operable accordion doors for privacy," said the architects. "The entire area below can be closed off if required."

The lower level also contains a kitchen, bleachers with storage cubbies, a desk, and a closet with a series of modules that roll on tracks.

"The clients can move around each module to configure the closet to their custom settings," said the firm. "To make it even more configurable, we used a deeper space in the back for lesser-used storage items."

"It was pretty complicated to design and execute, since the closet required a sprinkler system, fire-proofing and structural support."

Due to the restrained budget, the architects "hacked" IKEA products and used the components in several areas of the loft.

"For nearly all cabinetry and hardware (in the kitchen), we chose the simplest IKEA cabinet systems," the firm said. "We then worked backward to design custom-framing, surrounds and even cabinet-facing materials, to form a hybrid system."

"The contractor had a lot to say to us by the end of it, but it helped keep costs and scope in control."

Other examples include a pop-up restaurant made from hacked shelving, and a bar built using translucent plastic storage boxes.

CHA:COL, a multidisciplinary practice, was founded in 2006 by the husband and wife team of Apurva Pande and Chinmaya Misra. Pande began his career in the office of Frank Gehry while Misra worked at Jerde Partnership and Gensler.