Photo essay: British photographer Simon Kennedy documents an old laboratory at University College London in this series of manipulated images, which each come in positive and negative forms (+ slideshow).

Using a large-format camera and 4x5" black and white film, Kennedy shot the inside of the currently empty and unused Wolfson House, a former biogenetic lab set to be demolished as part of the HS2 high-speed railway development. He then overlaid the negatives to create subtle amalgamations of different spaces.

"I was struck by the intriguing way in which space came together within the building, combining the planes and lines of a quotidian Modernist architecture with a tangle of complex laboratory equipment," he said. "I responded instinctively to the compositions I found. At first glance, the results seem to be consistent, tangible and cohesive, but are actually fractured, scale-less, timeless and impossible."

An exhibition of the photographs, entitled Constructed Images, opens today at Fitzrovia Gallery. Architectural historian Andrew Higgott has written an overview of the project:

Simon Kennedy produces dazzling images of the buildings he is commissioned to photograph in his day-to-day work as an architectural photographer. Newly completed projects are brought alive by presenting them in a heightened condition, seen on a kind of bright morning, perfect and immaculate, emphasising architectural forms over their context: architecture considered as a whole object, a unified entity of parts.

And these images which present the building photographed in the best possible light are very carefully constructed: visual compositions are created, contingent elements are omitted, while aspects of the building that can be represented are included rather than those that can’t, such as complex spatial and material sensation. 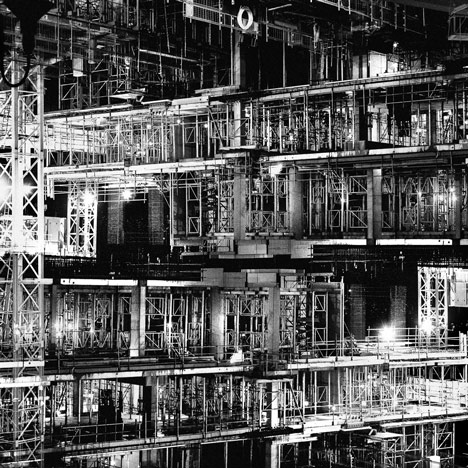 The photographs seen in Constructed Images show Wolfson House in central London: formerly used as a laboratory, it is presented empty and unused. A building of everyday Modernism, it was built at a time when architecture was built to an ideal, with the integrity of real materials and building elements rather than the simulacra of the Postmodern condition.

Each photograph is a construction, a photomontage of images from divergent space and time, so the photographs demand careful scrutiny. There is a dislocation of elements to create new formal configurations: staircases that lead nowhere, windows that are fractured, a play of spaces that makes no sense.

A faceted, fragmented montage of recognisable components, presented both in positive and negative images: and these elements are carefully juxtaposed and transformed into a new unity, reimagining Modernism qualities.

These constructed images are very much redolent of the analytical Cubism that influenced them, but also at a smaller scale echo the construction of architectural images by other contemporary artist-photographers such as Andreas Gursky or Beate Guetschow.

These uninhabited spaces are re-made into new intriguing configurations, shaped by the utopian impulse of Modernism. They present an intriguing play with time and circumstance to build an alternate photographic language of architecture.