Fashion designer Pauline van Dongen has created a coat for workers on the Wadden Sea World Heritage site, with detachable solar panels on the pockets for charging electronic devices (+ slideshow).

The Arnhem-based designer has teamed up with the Waddenvereniging, the Dutch Wadden Sea Society, to create a coat for volunteers and workers from the organisation, which has campaigned to protect the coastal area for 50 years.

The coat is designed like a classic parka – an oversized jacket with a hood, created for cold and damp weather conditions.

"The coat is made to give shelter, comfort and off-grid renewable energy to what we call Wad Walkers," explained the designer. "At low tide the Wadden Sea Society organises guided tours on the bottom of the sea, introducing people to the vegetation and animal life of the area." 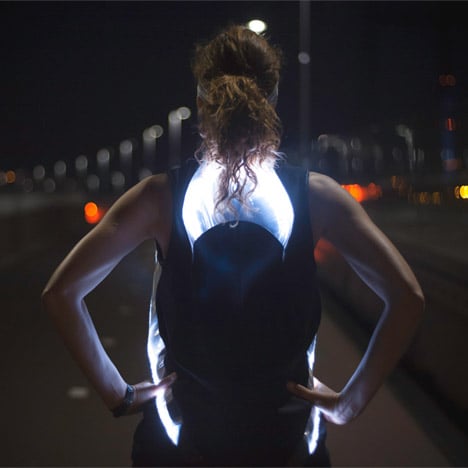 A thin waterproof and flexible solar panel created by specialist company AltaDevices is attached to one of the front pockets using buttons, and can generate enough energy to fully charge a smartphone after two hours of exposure to sunlight.

A zip-pocket on the side of the coat can be used to store the panel when not in use.

The coat's fabric is created using a yarn made from recycled denim. Developed by Blue LOOP Originals, which specialises in recycling jeans, the light blue cotton material is made by unravelling the original denim and then reweaving it to make a dense fabric.

The Wadden Sea, a southeastern part of the North Sea that spans the coasts of the Netherlands, Germany and Denmark, is a unique stretch of shallow water with islands, sandbanks, salt marshes and wetlands that are home to a wide range of wildlife. At low tide, vast areas of mud flats are revealed, and the area is named after them – the Dutch word for mudflat is wad.

The coastline has been heavily altered over centuries by human interventions including dykes and causeways, but sections are protected nature reserves. The German and Dutch parts were made a Unesco World Heritage site in 2009, and the Danish section followed suit in 2014.

The Wadden Sea Society is based in the Netherlands and was founded in 1965 to protect the coastline from land reclamation plans. Its volunteers and workers now focus on giving tours of the mudflats and islands, as well as helping to clean and preserve them.

"These outdoor wearers make the Solar Parka stand out in its function," said van Dongen. "The design thrives when surrounded by nature's elements."

Three prototypes of the Solar parka will be auctioned to help create more solar garments and raise money for the preservation of the Wadden Sea.

Pauline van Dongen has developed a reputation for combining fashion and electronics to offer an alternative take on wearable technology.

Her previous designs include a running vest with built-in LEDs to improve safety at night, a knitted cardigan with integrated stretch sensors that measures the movement of elderly wearers, and a collection of dresses with integrated solar panels.

Photography is by Jan-Willem Bullée.