Made from technical jersey embedded with washable strips of the low-energy lights and sections of reflective "prismatic" foil material that curve around the body, the designer's Phototrope shirt was developed based on her own experience as a runner in urban Amsterdam.

Each one includes a small battery hidden in a pocket inside the garment, allowing the lights to be switched on or off. The designer is working on future versions with LEDs that respond to the movement of the runner or changes in the surrounding environment.

"Through the use of the foils, the white light of the LEDs is being refracted in a very playful and slightly multi-coloured way," Pauline van Dongen told Dezeen. 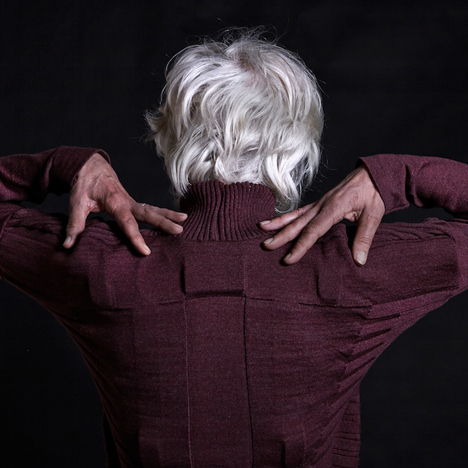 "When not powering the LEDs, the foil adds a new kind of expression to the shirt," she added. "It's something that we have not seen in regular sportswear so far, thus it's adding a new feature that creates a distinct look."

Many runners wear removable lights and reflective sashes and bands at night to make their presence more visible and to prevent getting hit by cars and cyclists. The designer wanted to create a design that felt more like a garment an individual would choose to wear regardless of the safety aspects.

"I used to wear a light bracelet around my arm to be visible at night, but I always felt that it looked quite stupid and it didn't feel comfortable at all," she said. "As a designer working in wearable technology, I thought I should know how to improve it."

"Moreover I believe that light in clothing does not need to be limited to offering only a functional value, like offering the wearer safety," she added. "When integrated in a desirable way, it can also affect and enhance our experience on a psychological and aesthetic level."

Van Dongen specialises in creating womenswear that combines fashion and technology. She launched her own label in 2010, and previous designs include a dress and coat that incorporate solar panels for charging mobile phones and a cardigan that helps monitor the flexibility of elderly wearers.

The Phototrope shirt debuted at the Nike We Run Amsterdam event on 16 May, where a team of participants led by the designer wore the garments to complete a 10-kilometre route.

"The main challenge with a concept like this is to use light in a more personal and intimate way and not to create something too flashy. People should feel comfortable wearing it, as well as feel empowered in their performance," said van Dongen. "While testing the shirt we also noticed that the light of the shirt seems to have a positive impact on the group dynamics of a running team."

The shirt is a follow-on from the Mesopic jacket developed by the designer in partnership with lighting manufacturer Philips in 2014.

Van Dongen is currently working on "fine tuning" the design to make the shirt suitable for mass production.

"Creating the right construction with the foils was quite challenging, since it behaves differently compared to the fabric," she explained. "Working with light in clothing has made me come up with interesting new constructions, shapes and cuts that I otherwise would probably not have used or even thought of."

Photography is by Hammond Images.