Bitonti's Mutatio shoes combine traditional leather uppers with latticed platform heels, which were made from nylon using a selective laser sinter (SLS) machine and then plated with gold. 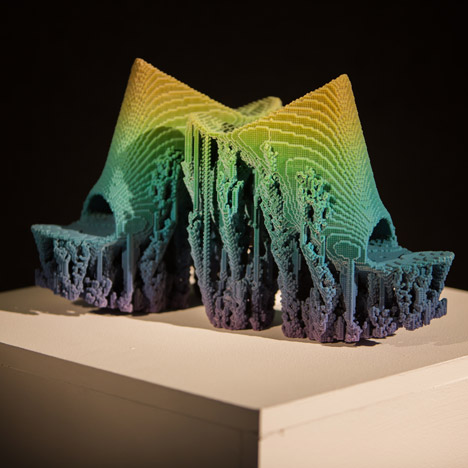 Each pair of heels features a slightly different mesh pattern, generated by tweaking a computer algorithm that controls the form of a digital model.

Changing the inputs to the model within an application created by Bitonti's studio, the designer was able to produce bespoke shapes that could be built up on a 3D printer.

"It's not so much about making something customisable," said Bitonti, who is best known for designing a 3D-printed dress for Dita Von Teese. "I wanted to think of a product as an algorithm."

The shoes were made by 3D-printing company 3D Systems, and will be presented during an event at United Nude's flagship store on Bond Street in New York this evening.

"I was introduced to Francis Bitonti not so long ago and immediately offered him our support for this project," United Nude founder Rem D Koolhaas told Dezeen. "I liked his idea to create computer-scripted designs to be uniquely SLS printed in a nylon and then to be gold plated for achieving highly finished luxury products."

Each base is paired with a textured black leather upper, which covers the entire foot and features a zip up the heel to make it easier to get on and off.

Rather than printing the heels entirely from metal – like Lionel T Dean's jewellery collection that is 3D-printed in 18 carat gold – the plating allows the shoes to remain lightweight and therefore easier to walk in, according to Koolhaas.

"Metal-plating 3D-printed plastics is amazing, as the thin metal surface feels cold while the entire 3D-printed object remains light and therefore very wearable as a shoe," said Koolhaas, who founded United Nude in 2003 with his Möbius shoe. 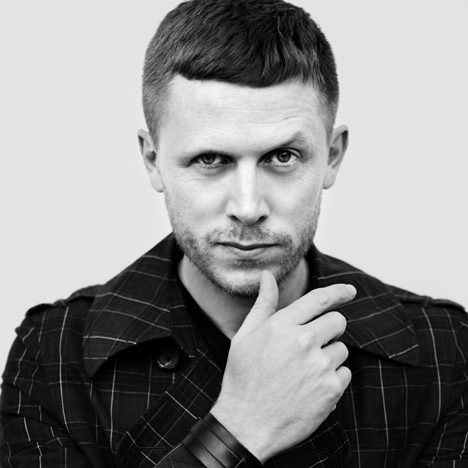 Bitonti has previously used a mathematical model to "grow" pairs of shoes with gradients of colour on a 3D printer, however, he expressed concern that the 3D-printing industry "is choking off its own revolution" earlier this year.

His software and algorithms used to create the Mutatio shoes have also been applied to generate an accessories collection, which will be manufactured by 3D Systems and released later in 2015.