The 3D-printing industry "is choking off its own revolution" with a combination of toy-like machines, over-priced materials and legal wrangles according to Francis Bitonti, the designer behind the printed dress for Dita von Teese (+ interview).

"3D printing has just become incredibly stagnant," said New York-based Bitonti, who feels that many of the machines on the market are little more than "tinker toys".

"A toy is not going to create the next industrial revolution," he said. "The biggest barrier that we have in the studio is just scaling products because the price points are so high."

Printing materials are too expensive, he added: "You're paying 65 dollars for a kilogram spool of PLA, which is crappy plastic, and you can't compete with injection moulding or any other type of production." 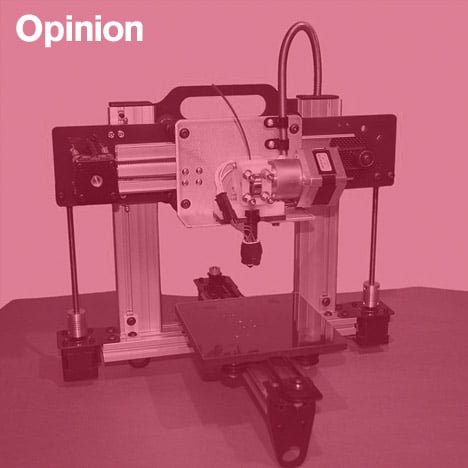 "We can't draft a new world and print it out"

Speaking to Dezeen in New York last month, Bitonti said that the 3D-printing industry needed to open up its intellectual property so that the design and manufacturing community could help drive forward improvements.

"They've got to open up," he said. "It's not that they need to open up all of their IP, but it's a lot of things. You see a lot of tinker toys because they're treating it like a copy machine. I think they need to change their mind and understand that it's a manufacturing technology."

Bitonti initially trained as an architect but has recently focused on applying advanced manufacturing techniques to fashion, jewellery and accessories.

Together with Michael Schmidt he co-designed the printed dress for burlesque dancer Dita Von Teese, which has become one of the most iconic products made using the technology.

Two years ago, 3D printing was being hyped as a revolutionary technology that would see a printer installed in every home and which would transform everything from architecture to fashion. 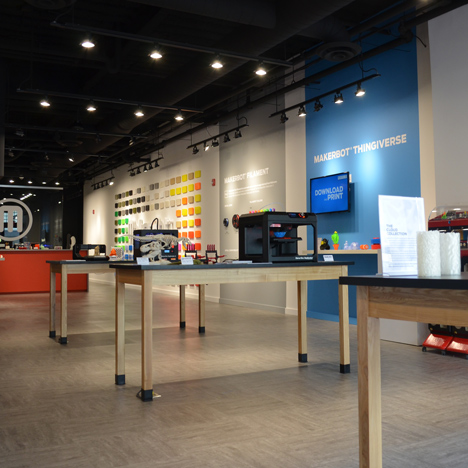 Interviewed by Dezeen last year, Bitonti himself said 3D printing "is going to turn the entire [fashion] industry inside out."

However many of the promises made by 3D-printing enthusiasts have failed to materialise.

MakerBot, once the poster-child of the industry, earlier this year laid off 20 per cent of its staff and closed its three retail stores after failing to meet its financial growth targets.

Bitonti said the industry only had itself to blame for this. "It's like [they're saying] let's just stop people from doing the best thing that this thing can do," he said. "And in a lot of ways that's happening."

Read an edited version of the transcript from our interview with Francis Bitonti:

Dan Howarth: What is going on with 3D printing at the moment?

Francis Bitonti: It's just become incredibly stagnant, and I think there's a number of reasons for that.

We had an explosion of FDM [fused deposition modelling] machines after those patents ran out, but it's an industry that's just completely choked by intellectual property law right now. Now the patents for DLP [digital laser projection] and SLA [stereolithography] are expiring, we're starting to see more and more of those machines enter the market.

But the real problem is, the machine manufacturers are making so many assumptions about how we use the machine that it's not really being treated as a tool for making things. It's so restricted in its nature.

The industry is choking off its own revolution

Dan Howarth: What does the industry need to do to go forward?

Francis Bitonti: They've got to open up. It's not that they need to open up all of their IP, but it's a lot of things. You seeing a lot of tinker toys because they're treating it like a copy machine. I think they need to change their mind and understand that it's a manufacturing technology.

There tends to be an attitude that we're going to produce those prototyping machines and they're just assuming that that's the fixed market, and it's very short sighted. Whereas you have something that dramatically changes our relationship to materials. But the way they price materials and the whole idea that we're going to sell these things – like you're going to buy materials from us like a HP inkjet printer – that's not really going to necessarily work.

That's the biggest barrier that we have in the studio is just scaling products because the price points are so high. You're paying 65 dollars for like a kilogram spool of PLA, which is like crappy plastic, and you can't compete with injection moulding or any other type of production

The industry is just choking off its own revolution in a way. It's like let's just stop people from doing the best thing that this thing can do, and in a lot of ways that's happening.

Dan Howarth: Is that one of the reasons why MakerBot has not been as commercially viable as people thought?

Francis Bitonti: If you keep treating this as a consumer product like that, basically you have an Easy-Bake Oven. It's like making those creepy crawlies, you have the gel and you pour it into the mould. I can download things from Thingiverse but you can't really innovate with that. It's not giving me enough authorship to make something I haven't seen before.

The manufacturer of the tools is making assumptions about what I'm going to produce, which is what makes it a toy. And a toy is not going to be the next industrial revolution like everybody's saying.

A toy is not going to be the next industrial revolution

Dan Howarth: So 3D-printer manufacturers need to move away from the consumer market and make more serious machines for the industry?

Francis Bitonti: There's not a single enterprise solution out there. And that's kind of amazing and I wonder how much of that is a symptom of Silicon Valley. All these venture capital firms are investing in social media startups and they're try to aggregate users and manufacturing doesn't work like that.

If you look at the fashion industry, particularly sunglasses, a lot of these brands are all owned by a manufacturing company and it's not necessarily going to be the same entry point. There might be a market for consumer products – to think of a 3D printer as a consumer product – but things have multiple materials, they're complex. Even if you're going to perfect multi-material printing, you're probably going to want multiple printers.

The printer in everybody's house might be a dream that's only satisfied by nanotechnology and molecular assemblers. To get that kind of robust palette of materials from a technology that extrudes things it can melt, I think you're asking a bit much.

Dan Howarth: Does the 3D-printing industry need a new vision?

Francis Bitonti: I think the dream of thinking about objects as information is a reality and that can happen. I'm sure Amazon's going to start doing this at some point and looking at it as a fulfilment system makes a lot of sense.

That's going to be a much larger market and it's going to be a lot more efficient and worth people's time and energy to redesign the products, which is what they're going to have to do. A 3D model doesn't make something that prints out well and works. You have to understand the unique material properties of 3D printing, so its a redesign and it's an investment for people.

Dan Howarth: So that's going to require software solutions in order to make this work?

Francis Bitonti: There are software interfaces that let us create machine code, that let us create material innovation. It's not really just about shaping geometry. All these consumer apps are like "let's sculpt a teapot" or "I'll take a selfie". We're trying to make 3D modelling super easy and we can do that but that problem is when the materials form. It's the gap between visual and physical, and that's what we're not allowed into.

Dan Howarth: The 3D-printing industry got so much attention and media coverage, but now it seems to be petering out. Stocks going down, companies are shutting stores. Are people bored with it?

Francis Bitonti: It's sad. But I don't think it means necessarily that it didn't work. I think people forget how young it is, it's not been around that long. There was big rally of excitement when we started getting all these FDM machines on the market. MakerBot's success really did a lot for the public eye but that was one technology out of a lot of technologies that are not yet able to be worked on.

This is where it comes down to the IP just not being open enough yet. And every time this happens – I've seen it happen with DLP and SLA – these machines that are coming out, they're cheaper, they're faster.

If you look at carbon 3D, that was a technology that was closed until fairly recently. It's 200 times faster and a patent just opened up, so it's not that it's game over. I think the media was really quick to jump on it and I think that it's going to rally. But the industry needs to start to think about it differently. And I think a lot of people in this space are coming from manufacturing. And they need to realise that they really are information companies.

Dan Howarth: Should established designers get more involved in 3D printing? Would that give the industry the impetus it needs?

Francis Bitonti: There's a generation of designers that are not equipped to design for this technology. It's a totally different way of thinking.

Materials themselves were industrialised. You would get a block of of material, and it would have standard widths and dimensions and you pretty much knew that it would have the same properties all the way through. That's not the case anymore.

You're not going to take a really seasoned industrial designer and make them make things that are really great for 3D printing. I think that's been a huge misconception, and that's where a lot of the problems have been.