London Design Festival 2015: London artist Barnaby Barford has stacked 3,000 tiny shops made from bone china into a version of the biblical Tower of Babel at the V&A museum (+ slideshow).

It measures six metres high and includes 3,000 individual china blocks, each decorated with one of the artist's photographs of a London shopfront.

"We're shoppers, aren't we?" Barford told Dezeen. "I think we've ceased to be citizens and we're now just consumers. So I wanted to explore that within our city."

He started by cycling around London and taking pictures of different shops with the view of turning them into a towering sculpture. 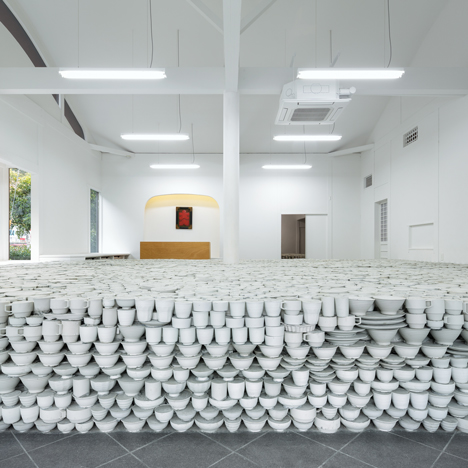 Yusuke Seki uses 25,000 pieces of crockery to raise the floor of a ceramics shop

Appearing to be piled up on top of each other, the small blocks are arranged into a tapered form and grouped by expense.

At the bottom of the tower are derelict and abandoned shops, followed by chicken shops, pound shops and newsagents above, then ending with exclusive boutiques, galleries and auction houses at the top.

Each of the unique, signed pieces is for sale, ranging in price from cheapest at the base to most expensive at the peak.

"It's forcing the viewer to confront where they fit into this hierarchy of consumption," said Barford, who has previously exhibited at David Gill Galleries and created alternative souvenirs for the London 2012 Olympics.

"In one way it's a massive celebration of commercial London, which has always been a place of trade, and it's a critique," he added.

A dedicated website shows the pieces individually and plots the different shops onto a map of London.

The installation is based on the fabled Tower of Babel from the Bible's Book of Genesis. In the story, humanity built a tower that rose up to the heavens, but God put a stop to the plans by muddling up people's speech into different languages and scattering them all over the world.

"London is the complete opposite," said Barford. "There's people from all around the world, speaking all different languages, coming here to make a name for themselves and to build this tower of commercialism."

Barford conceived the tower five years ago after working on a project about the seven deadly sins and reading Utopia – a book published in 1516 by English lawyer and philosopher Thomas More, in which he depicts a fictional island's society and its religious, social and political customs.

The pieces were made by Stoke-on-Trent company 1882, which slip-cast the ceramics and digitally transferred the photographs onto the surfaces. "Imagine the Photoshop work," said Barford.

Numerous firing and enamel retouching stages occurred before the shops were completed.

The Tower of Babel will remain in place until 1 November 2015, coinciding with this year's London Design Festival – along with an installation of adaptable mirrored platforms in the V&A's central courtyard, which closes 2 October.

Architects and designers including David Adjaye, Alex Chinneck and Mischer'Traxler will create installations for the city-wide event, which takes place from 19 to 27 September 2015.

More from the V&A museum