First-class passengers on British Airways flights to Delhi, Abu Dhabi and Kuala Lumpur will be seated in suites and cabins designed by UK agency Forpeople for the airline's new fleet of Dreamliner aircraft from next month (+ slideshow).

Forpeople has designed the first-class suite and cabin for British Airways' new Boeing 787-9 Dreamliner aircraft, which will also fly to Muscat, Austin and San Jose, California, by November.

The suites use new colours and material finishes, intended to "enhance the robustness and build quality" according to Forpeople founder and BA creative director Richard Stevens.

"We obsessed about (and developed) every material – soft and hard," Stevens told Dezeen. "Even auditing the machined aluminium and anodising processes to ensure we could achieve consistent production runs."

The agency considered how materials would be affected by different sources of light – whether natural or from the aircraft's windows that can be electronically dimmed – and worked with Pritchard Themis on lighting design for the cabins.

The 787-9 Dreamliner's cabin is smaller than the first-class areas on BA's other aircraft, meaning it holds only eight suites rather than 14 per cabin.

"This was an opportunity to really think about the intimacy of the space from a cabin and suite perspective," Stevens said.

Much of the design was informed by extensive research into customer feedback, which Forpeople used as insight.

"Our main aim was to improve upon every detail of the experience based on this," Stevens explained. 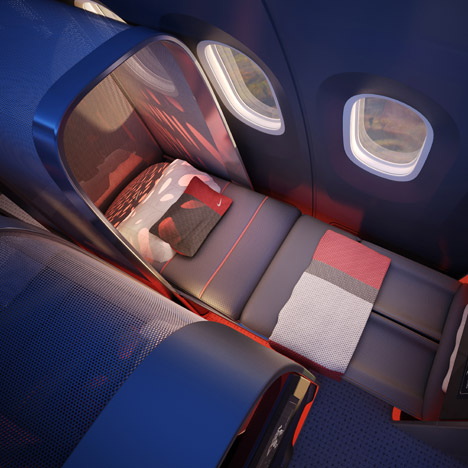 "To deliver uncompromising comfort and consideration around the different 'modes of living' a customer performs while on board. And giving customers the ultimate feeling of calm and control."

Customers and colleagues were invited to test mock-up suites, which allowed the agency to thoroughly evaluate details such as seat geometry and storage materials to finalise the "optimum layout".

"People often talk about new aircraft cabins in terms of whether it's an evolution or revolution compared to what’s gone before but we prefer to talk about 'refinement' as being far more important to customers than just making something different for different's sake," Stevens said.

Each suite is built, assembled and installed on the aircraft, and is designed to be robust without adding excessive weight.

The project continues an ongoing partnership between the airline and the design agency, which has provided branding, art direction, product and service design to BA for the past ten years.

"They have such an impressive heritage in high-end automotive, technology, environment and luxury design that, combined with their experience working so closely with us for over 10 years, has translated beautifully to the new cabins for the 787-9," British Airways' head of customer Abigail Comber said in a statement.

The interiors of the first-class cabins for Dutch airline KLM were designed by Hella Jongerius, while the most expensive seats on Hong Kong-based Cathay Pacific's planes are by Foster + Partners.

In 2011, aviation firm Airbus unveiled a conceptual aeroplane that featured a transparent cabin and virtual golf course. The UK-based Centre for Process Innovation, meanwhile, suggested replacing cabin windows with flexible screens that would project 360-degree views from outside the plane.

Photography is by Alister Thorpe.