Barcelona studio NOEM has designed a home for a film director and science-fiction fan that resembles a spaceship raised above its forested site in a suburb of Madrid (+ slideshow).

The Spaceship Home is located in the La Moraleja neighbourhood to the north of the Spanish capital and was designed by NOEM for a client who wanted a residence that makes the most of its surrounding views.

"The building is designed as the special place where he could enjoy the plot, the peaceful environment and where he could meet with friends and celebrate with privacy," architect Rosa Vilarasau told Dezeen.

The brief also stipulated that the house should be quick to construct, achieve PassivHaus standards of energy efficiency – using natural ventilation and insulation instead of electric systems where possible – and reflect the owner's passion for science-fiction cinema and home automation.

"In the early process of the design we showed him a drawing with the home elevated above the forest, which produced an image of a home that looked like a spaceship," Vilarasau explained. "He liked this effect and we started to design a spaceship home incorporating many nods to sci-fi movies." 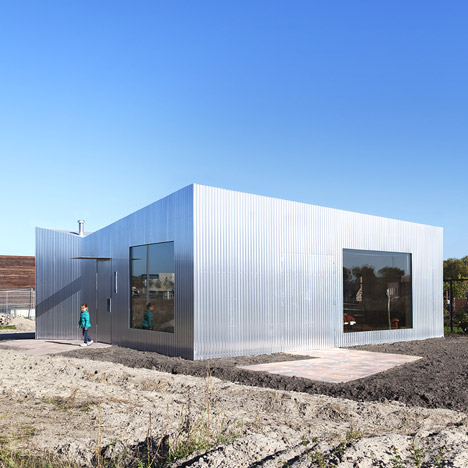 A prefabricated construction comprising three wooden modules attached to a metal frame enabled the architects to build The Spaceship Home in their workshop and erect it in just two months.

The exterior cladding is made from lacquered galvanised steel sheets that enhance the building's technical aesthetic, while the highly insulated timber structure ensures excellent thermal performance.

Metal legs raise the house four metres above the forest floor to provide panoramic views over the surrounding treetops, particularly from a large terrace that extends along one edge.

A rolling stairway that previously belonged to Spanish airline Spanair was acquired from a Barcelona airport to provide access to the property's elevated entrance.

In addition to the space-age form, the architects integrated gadgetry that automates many of the house's services or enables them to be controlled remotely using an app.

A sensor that receives a signal from the owner's mobile phone on approach prompts lights incorporated in the staircase to turn on and switches on the house's internal lighting if it is dark.

The front door is also automated and features a pantographic mechanism that causes it to open out and across, while emitting a recorded noise that evokes the pressurised doors of spaceships seen in many classic films.

Inside the entrance, a control hub influenced by George Lucas's Star Wars film series features two tablet computers that can be used to manage the home's technical services, including lighting, heating, security and the sound system.

The control area is located in one of the modules that also incorporates the bathroom and the kitchen's services. Two further modules are situated on either side, with one containing the bedroom and study, while the other houses the kitchen, dining and lounge space with its adjoining terrace.

Additional details that enhance the futuristic feel of the interior include perforated metallic walls backlit by LEDs that can be adjusted to emit any colour of light. Green lights on the sides of the exterior and a red light on the roof recall the navigation lighting used on aircraft.

"It was funny and fantastic but quite challenging to integrate all of this stuff in a PassivHaus project," said Vilarasau, who added that ultimately she was pleased to work with "a client willing to follow an idea through to the end and down to the very last detail."

Other architecture projects designed to resemble spaceships include a a mobile research studio that rolls around a military base and a shiny aluminium-clad house in the Netherlands.

Photography is by Meritxell Arjalaguer.