Product designer Marta Bakowski has created a series of lamps wrapped in cord that use single threads to create a graphic representation of rays of light (+ slideshow).

Available in five designs, the Rays lamps comprise a circular acrylic panel made up of with glossy and matt sections, with a mirror LED bulb at the centre.

The bulb is surrounded by a circle of hand-woven two-tone threads which the designer said creates "a vibrating pointillist effect" when they interlock.

Evenly spaced singular cords of waxed polyester in varying tones radiate out from the middle of the lamp. 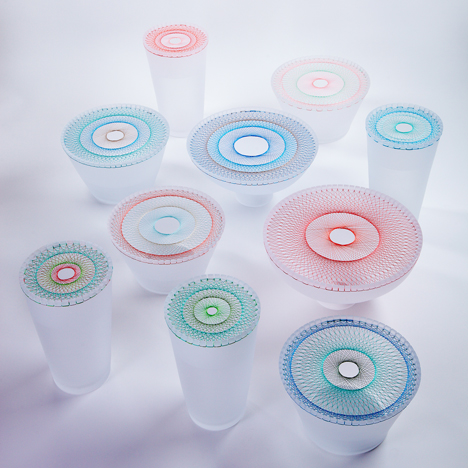 "The collection is an interaction of graphical lines and layered materials with fresh and surprising shades, creating a radiant effect and changing aspect whenever the light is on or off," Bakowski said.

Five editions of the lamp are available, each with different coloured threads and woven sections of cord, and one larger design in grey acrylic.

"Rays is a reflection on the evocation of light and the ability of colours and materials to render radiance and brightness according to the surrounding light environment," the designer said.

The lights were shown as part of the Now! le Off exhibition at Paris Design Week, which took place from 5 to 12 September 2015, and will be exhibited at Mint Gallery in London later this year.

She has collaborated with designer Tord Boontje, and English studio Hendzel & Hunt, as well as working as an assistant to Hella Jongerius. She set up her own studio in Paris in 2013, and is currently designer in residence at the Ateliers de Paris.

German designer Pierre Kracht used woven cocoons to create a lamp, light fitting and chair, and Bangkok studio THINKK used wrapped thread to form lamps using a low-tech machine that would allow users to customise the shape and colour of the shade.