Amanda Levete, Grimshaw and Heneghan Peng are among the six teams that have unveiled designs for a new bridge over the River Avon in Bath, England (+ slideshow).

Bath Quays Bridge will link a new development on the bank of the River Avon with Bath's UNESCO-protected city centre, which is known for its Roman ruins and Georgian architecture constructed in honey-toned stone. It will be the first new bridge to be constructed over the river in 100 years.

A competition to design the £2.5 million bridge was launched by Bath and North East Somerset Council in February. From the fifty designs submitted, six shortlisted teams were asked to develop proposals. 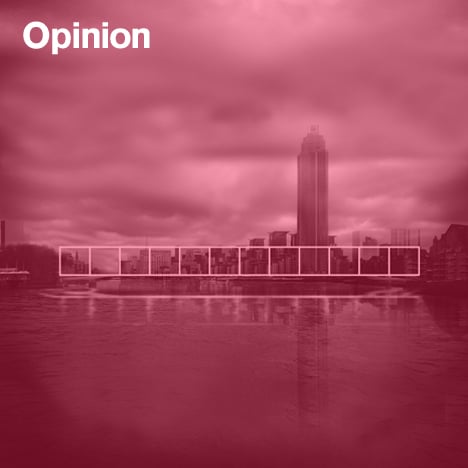 "Definitely not a bridge"

Each of the firms has a track record in designing public structures – Flint & Neill is a bridge-design specialist, Heneghan Peng is the firm behind the Giant's Causeway Visitors' Centre in Northern Ireland and AL_A has just completed a Melbourne's MPavilion, a project billed as Australia's answer to Britain's annual Serpentine Gallery Pavilion.

The first of the anonymously submitted proposals is a metal-framed bridge that refers to the city's industrial history. "It synthesises the exploitation of modern engineering with the heritage of the city," said the design team.

The second shortlisted entry, a wide curving path with crisscrossing balustrades has a built-in bench to encourage users to pause and enjoy views of the river.

"The bridge walks the fine line between attracting attention in a memorable way and blending in with its rich context," said the designers.

The third concept, a lighting bolt-shaped structure named The Zig Zag Bridge, is intended to be "robust and enduring and a new landmark for Bath."

Entry four features a gently undulating surface and spindly balustrades and is designed as a "gentle tie" between the landscape on either side of the river.

Planting trails from a timber pergola in the centre of the fifth design, which also features cable-mesh balustrades and a fanned seating arrangement that steps down to a path by the river's edge.

The final entry, "a place to pause and watch the boats go by", has perforated metal balustrades. The rusted colouring of the railings "creates a link between the greenery of the bank and the industrial buildings."

The six shortlisted designs for Bath Quay Bridge will be exhibited anonymously at the city's council-run One Stop Shop until 25 September and are also available to view online on the Bath & North East Somerset Council website.

The winning design will be selected by a Council jury and announced in November 2015.

Many cities are investing in developing similar pedestrian and cycle bridges to help alleviate traffic and create new connections through urban areas.

In the USA, Rem Koolhaas' firm OMA teamed up with landscape architecture studio Olin to create the design for the 11th Street Bridge Park – a raised garden spanning Washington DC's Anacostia River – and 64North Architecture is designing a pedestrian and cyclist bridge connecting the San Francisco Bay waterfront and Palo Alto – home to some of the world's leading technology companies.