World exclusive: Ronan and Erwan Bouroullec have designed a new television for Samsung with a distinctive I-shaped profile, which the French designers say they approached like a piece of furniture (+ movie).

Called Serif, the Bouroullec brothers' television features a case that flares out into a base at the bottom and a shelf at the top. The resulting form resembles a capital "I" in a serif font when viewed from the side.

In an exclusive video interview with Dezeen, Erwan Bouroullec says that he and his brother wanted to create a product with more character than other television sets, where size and slimness are usually seen as the most desirable qualities.

The base at the bottom of the TV means it can be placed on top of other objects without the need for a separate stand, while owners are encouraged to place items like books or ornaments on the shelf at the top.

Bouroullec says that he wanted to design a television that could be placed and moved around like any other piece of furniture in the home.

"The motive was to make an object that sits properly in the world we live in," he explains. 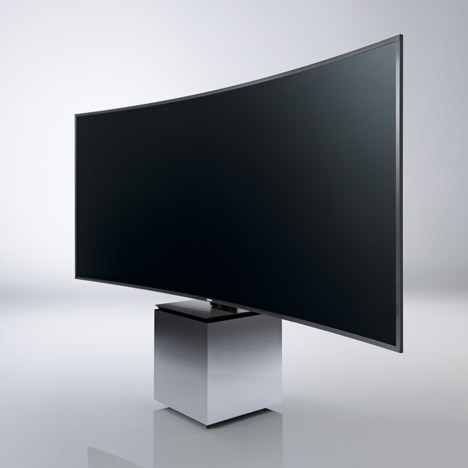 The TV features a fabric panel on the back to hide all the ports and wires, so it can be moved away from the wall if required.

"It has some magnets on it," Bouroullec says. "So you can easily open it, plug in as much as you want, and then close it."

As well as the television set itself, the Bouroullec brothers also designed a simple white remote control, as well as the user interface.

"We got total freedom, so we pretty much did everything," Bouroullec says. "Serif is quite complete – inside and outside."

The main feature of the Bouroullecs' user interface is a setting called Curtain Mode, which covers what's on the screen with a translucent graphic effect. This enables users to temporarily hide the image without turning the TV off completely.

"You can just shut down the live content like you would pull a curtain in front of a window," Bouroullec says. "During a soccer game, when there are advertisements, you can shade it for a while so they disappear."

The Bouroullec brothers are best known for their furniture designs and have released new collections for brands including Vitra, Artek and Hay this year.

Serif is the first television set they have designed, but Bouroullec believes that large consumer electronics companies like Samsung would benefit from working with small independent designers more often.

"When you go into a new field, you can really open new doors," he says. "On one hand, you can really be naive and make mistakes a child might make. But on the other hand, your ability to go behind the normal borders is much stronger."

This movie was produced by Dezeen for Samsung. It was filmed at the Bouroullec brothers' studio in Paris, France.

The music is by UK producer 800xL.