The Sofa in Sight collection includes six new designs for SCP in celebration its 30th anniversary this year. The range pays tribute to the British brand's history of manufacturing upholstered furniture, which has been made at a factory in Norfolk, England, since 1991.

"The sofa is a piece of furniture rooted in Western culture, in ideas of comfort and in thoughts about the modern home," said a statement from SCP. 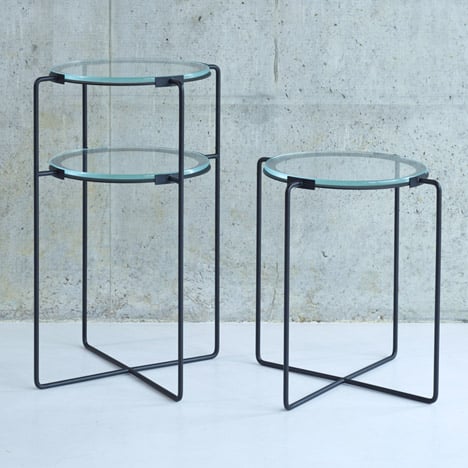 Anastassiades, known for his sculptural lighting, has created his debut furniture design as part of the collection.

His two-seat sofa is designed for those spending longer amounts of time in communal offices or public spaces.

"Public furniture is often placed in waiting areas or spaces of transition, and now most people are now likely to be engaging with work, social networks or other media while in these space," SCP said. "Gone are the days of sitting in a stark reception area on a Barcelona chair checking your watch."

Wood panels form an enclosed rectangular seat and back, with padded surfaces lining the inside.

A low pedestal with a textile surface, which can be used as a footrest or a table, has also been designed to match.

German designer Konstantin Grcic's Pasha sofa was originally created for SCP in the 1990s, but never made it into production.

Now launching as part of this range, the updated sofa facilitates a reclined seating angle – created by a seat that rests on a fully upholstered base and curves up to form the backrest.

The armless design has a ribbed surface that is divided into two sections vertically down the middle, each decorated with long thin cushions.

Other seating designs launched by Grcic this year include a chair with a backrest shaped like a pool noodle and a range assembled from flat wooden planes.

Design studio Faudet-Harrison – based in both London and Amsterdam – took references from 1920s furniture for its sofa system, available as three-seater and L-shapes configurations as well as a bench.

For the sofa models, the back gently curves around the seat to form the arms, while seam details create minimal decorations across the surfaces.

"Kurrein was struck by how many houses did not use sofas or armchairs at all – rather hammocks and cushions – so decided to re-assess the sofa typology itself," said SCP.

The sprung seat cushions are placed on "hammocks" of material hung from a frame of cylindrical wooden elements, while the padded back and arm support are tucked in behind.

The Sofa in Sight collection also includes pieces by British furniture designers Terence Woodgate and Matthew Hilton, who have both created sofas with sloping armrests and thin metal legs.

In SCP's Shoreditch store, the designs are on show in both brightly coloured upholstery on the ground floor and more neutral tones upstairs – all using materials from Danish textile brand Kvadrat.

Launched in 1985 by Sheridan Coakley with a showroom on Curtain Road in London's Shoreditch, SCP has since become one of the UK's most important design retailers, as well as a commissioning and producing its own products.

As part of its 30-year celebrations, SCP relaunched some of its iconic products – including British designer Jasper Morrison's first produced designs – in Milan earlier this year. These products are also on show at the shop on Curtain Road during London Design Festival 2015, which runs from 19 to 27 September.