Milan 2015: British furniture brand SCP is celebrating its 30th anniversary by reissuing a range of products and prototypes from its archives – including Jasper Morrison's first produced designs (+ slideshow). The London-based company is reviving 14 pieces from its archive to reissue as the SCP Classics collection.

Launched in 1985 by Sheridan Coakley with a showroom on Curtain Road in London's Shoreditch, SCP has since become one of the UK's most important design retailers. The brand commissions and produces its own products and has helped launch the careers of designers like Jasper Morrison, Matthew Hilton and Konstantin Grcic.

"I have been slowly reintroducing some designs over the last couple of years and being our 30th anniversary, we all thought it serendipitous to launch more in 2015," Coakley told Dezeen. Among the key pieces from SCP's history in the collection are Morrison's prototype for a slatted bar stool from 1986 and a pair of round steel-frame side tables with glass surfaces from the same year, which were the British designer's first commercially produced pieces.

"The side tables really put a marker down for what I felt SCP's design philosophy should be," said Coakley. "In the 1980s Britain was a pretty miserable place. Very few people were interested in modern design, or in fact, modern anything. We still lived in a nostalgic Britain of warm beer, cricket and antique furniture." 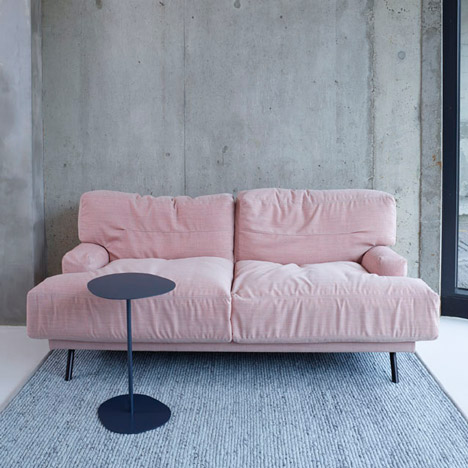 "I sold most of our designs to small independent design stores in Germany and the USA," he explained. "Now modern furniture is the norm. Design has become more relevant and, more importantly, accessible at all levels thanks to the media, new independent retails stores and the web."

The collection includes a number of products that were originally produced in a short run, and prototypes that SCP was unable to realise due to a lack of manufacturing capability and high material costs in the UK. According to Coakley, these can now be reissued or put into production due to changes in the UK's manufacturing industries.

"A lot of our earlier designs faded away partly because during the 1980s and 1990s small-batch production was difficult if not impossible to produce at a reasonable cost in the UK, and indeed Europe, and the market was relatively small," said Coakley.

"What is left of the manufacturing base in the UK has now invested in new and advanced machinery, which has made them more competitive in the world market," he explained. "Subcontractors are more interested in working with small companies, like us, and there is a revival in quality production that has a provenance."

Three metal tableware designs by Matthew Hilton originally date from the 1980s, including the Swan Candlesticks from 1987, which are available in two sizes. Other pieces include the Mono Tables from 1995 by German designer Konstantin Grcic, which feature top surfaces made from laser-cut steel sheets pressed into four different graphic shapes. Grcic's wooden Prado Desk from 1996 and Tom Tom and Tam Tam side tables from 1991 are also in the range.

A revolving bookcase designed in 1996 by the late British designer James Irvine, who died in 2013, has been updated for production by his studio. Made from CNC-cut MDF shelves laminated in white Formica and vertical dividers with a light-grey laminate, the structure is held together with aluminium rods at each corner.

Coakley also began working with British artists in the 1990s, and in 1999 staged an exhibition called Please Touch, which featured furniture designs by Rachel Whiteread and Richard Wentworth among others. Whiteread's upholstered Daybed, made from a solid-beech frame covered in foam and modelled on the space underneath a single bed, is in the Classics collection.

The collection also encompasses two new editions of designs by Terence Woodgate – the Parallel Shelving System from 1997 and the Woodgate Sofa from 1994 – as well as the more recent Missed Daybed by Michael Marriott, which was designed for SCP in 2001.

The collection was on show during Milan's design week in an exhibition curated by Marriott, among a range of other prototypes and products from SCP's history.

Called Arrangement of Furniture in a Room, the exhibition displayed SCP's archive pieces on top of old furniture from a wide range of periods and styles, with small coasters of bright orange-covered wood to delineate the products from the vintage pieces.

In a book to accompany the exhibition, London Design Museum director Deyan Sudjic – whose institution will host the show when it transfers to London in May – said Coakley had been "the right man, in the right place, that at the time, looked very much like the wrong time" when he set up SCP.

Coakley said that the company had maintained its reputation by "carrying on being normal and open to what is relevant in the world." "Today more than ever, we need to reflect on what design should be used for – see Beyond the New by Hella Jongerious and Louise Schouwenberg," he said. "How many more new chair designs does the world need?"