Architect David Chipperfield has designed a series of bronze, steel and glass bookshelves and cabinets for his first gallery collaboration with David Gill.

On display at the David Gill Gallery in London's Mayfair, the pieces contain elements that reference the architecture of Ancient Greece. They also give the collection its name, Ionic – one of the three orders of Classical Architecture, along with Doric and Corinthian.

The blackened steel shelves of the cabinets and bookcases rest on a bronze framework that uses slender supporting poles. 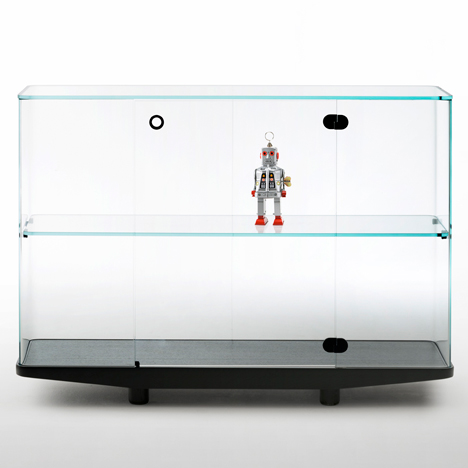 The cylindrical rods are fluted to represent the Ionic columns, and are capped with flat sections on either end so they can be fixed to the horizontal sections of the frame.

The cabinets have sliding doors made of strengthened rippled glass – with both transparent and opaque versions on display – which is repeated in the sides and back of the bookshelves.

Chipperfield – who recently unveiled plans for the renovation of the Royal Academy of Art – told Dezeen the exhibition was a chance to create furniture that was free from the usual restrictions dictated by the marketplace.

"With David Gill, we were able to operate outside the conventional commercial furniture system – it was strange and yet very interesting," he said. "I still wanted to make a utilitarian object but didn't see utility as its primary concern – or the economy of means." 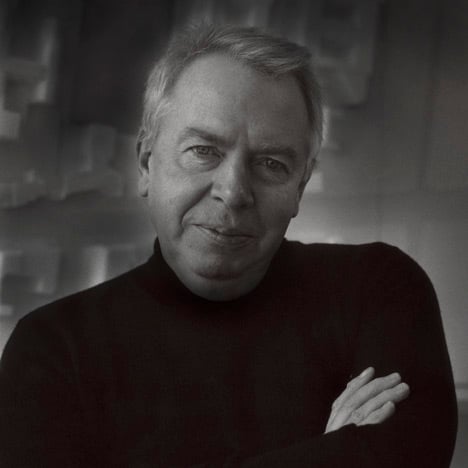 "I didn't have to worry about how it was made, just to make something beautiful out of beautiful materials such as casting and bronze, things that normally lie beyond the possibilities of the commercial process and invest the object with a strong physical presence," he added.

The architect has designed several other furniture pieces this year, including a table, bench and stool from wooden planks for German furniture brand e15.

David Gill – who established his central London gallery in 1987 – is no stranger to collaborations with architects, having previously shown Zaha Hadid's Liquid Glacial furniture collection.

Work from Fredrikson Stallard and Mattia Bonetti has also been shown at the gallery. The Ionic exhibition is on display until 3 October 2015.

Glass has been a popular choice for furniture this year, with designs by Patricia Urquiola, Tokujin Yoshioka and Nendo all revealed during Milan design week in April.