The alumni show is spread across the Millbank site in central London and the interactive swing installation is at Rootstein Hopkins Parade Ground.

Comprised of two swings – each as two different geometric shapes in bold colours – the playful installation is intended to reference the Constructivist art movement.

The swing is a continuation of the designers' original Constructivist interactive playground, commissioned by the V&A museum for its Friday Late events programme that celebrated Russian art and culture. 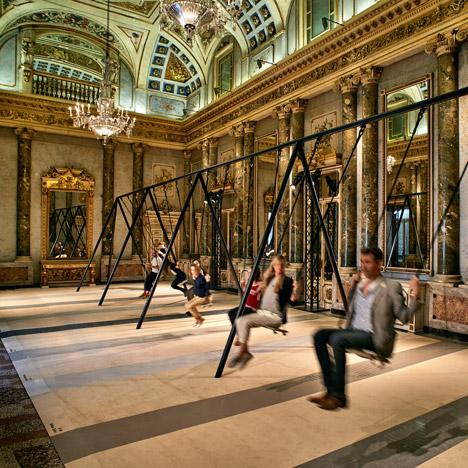 "The playground is inspired by the oppressive Constructivist design movement and celebrates this in a liberating and playful way," Helen Chesner told Dezeen. "The public are invited to interact and become a part of this kinetic sculpture."

Constructivism was an active art and architectural movement in the early 20th century, originating in Russia. The idea was to strip back art to its basic elements, resulting in works that were generally minimal and geometric. It provided the ideas that would go on to influence Modern art movements such as Bauhaus.

"We've always been interested in its strong, abstract visual language and how the design movement is fundamentally based on a combination of marks and simple geometric shapes, yet it communicates such powerful messages," said Isabel Gibson.

The installation was created off-site in Isabel + Helen's studio in Bermondsey. Chesner said that to achieve a fully working and dynamic swing, "there was a bit of trial and error initially and some physics involved too".

Foam cladding is used to cover the wood and metal structure to give it a soft, cushioned finish.

Isabel + Helen specialises in set design and interactive installations. Gibson and Chesner met while studying graphic design at Chelsea College of Art and have been collaborating together on various projects for notable clients ever since. 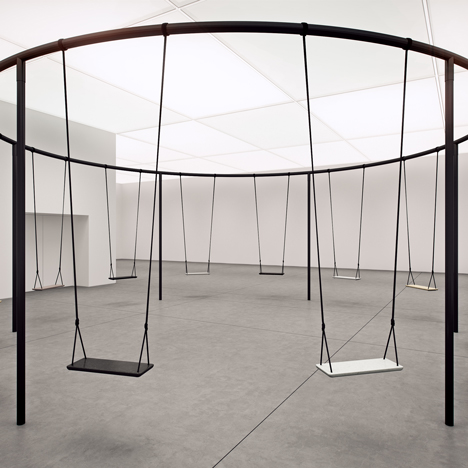 "It has definitely been one of the most fun builds and it is nice to be back exhibiting at Chelsea where we originally met," Chesner added.

In another recent installation that encouraged play, architecture collective Assemble – recently been shortlisted for the Turner prize – worked with photographer Simon Terrill to create the Brutalist Playground at RIBA.

Chelsea 10 runs from the 19 to 27 of September, at Millbank, as part of London Design Festival 2015. See Dezeen's guide to the must-see installations and exhibitions at this year's event.