London designer Philippe Malouin has used quartz surface material Caesarstone to form the seats of twelve swings arranged in a circle for an exhibition later this month.

Tasked with presenting Caesarstone in an unusual and interesting way, Malouin created the Swings installation to be presented at this month's Interior Design Show (IDS) in Toronto. 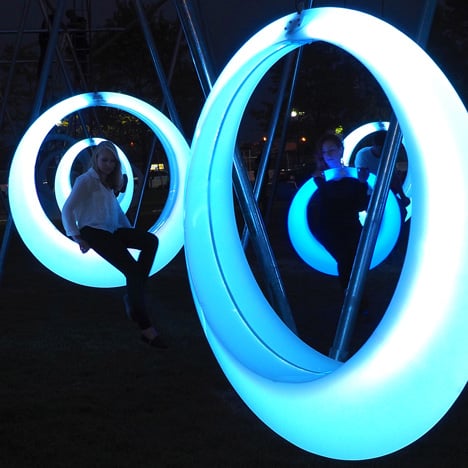 "I thought that it was important to display the collection of Caesarstone products that was the most suiting for this year," the designer told Dezeen. "I also wanted to display the products individually in a coherent manner."

Different versions of the material – each a slightly different colour – were cut into rectangular sections and suspended from a length of rope at either side.

Swings was designed to increase interaction with the material, which is normally used for kitchen work surfaces.

"The Swings installation made a lot of sense as we wanted to display the Caesarstone samples in an orderly fashion while inviting people to touch and interact with the material," said Malouin. "Either if you would like to sit and rest, or swing, the installation was an obvious choice."

Hung from a thin circular steel frame supported by four posts, the twelve swings are arranged so that users can face each other when rocking back and forth.

"The fact that everyone can swing towards one another changes the interaction you have with other people on the swings," Malouin said.

The Caesarstone was shaped with a computer numerically controlled (CNC) machine, which hollowed out the material to reduce its weight, and attached to the bespoke frame using similar fixtures found on regular playground swings.

Each seat has rounded edges and corners, where the ropes are fed through holes, looped back and knotted to secure them.

"An important part of designing something that will be displayed during a trade show is to design something that interacts with people without forcing them to play an annoying game," Malouin added.

The Interior Design Show will take place in the North Building of the Metro Toronto Convention Centre, from 22 to 25 January.