Zaha Hadid has created a seven-storey office block in Moscow for the city's growing IT and creative sectors, with off-set floor plates and a dramatic black-and-white atrium (+ slideshow).

Designed by the London-based architect to provide offices for startup companies, the Dominion Office Building stands in a residential and industrial area near Dubrovka metro station in the south-east of the city.

Joins between the sections of the floor slabs and in the glazing that wraps each floor form a grid pattern across the facade.

Staircases with white balustrades and shiny black treads diagonally crisscross an atrium in the centre of the building. Curving balconies overlook the void from each floor, creating a similar sculptural effect to the staircases in Hadid's MAXXI museum in Rome.

"Conceived as a series of vertically stacked plates off-set at each level with connecting curved elements, a central atrium rises through all levels to bring natural light into the centre of the building," said Zaha Hadid Architects.

"Balconies at each level project into the atrium and correspond to the displacement of the outer envelope and a series of staircases interconnect through this central space."

The building, which has seven storeys above ground and two floors below for car parking, also includes a restaurant and conference facilities. It has a 62-metre by 50.5-metre footprint, with a 21,184-square-metre floor plan that is predominantly occupied by offices.

These are arranged against the glazed facades on each of the seven upper floors, while service spaces including fire escapes, lifts and toilets are set around the edge of the central void.

Glass doors separate the offices from meeting spots located on the balconies and allow natural light to filter through from the atrium.

Further meeting spaces and a restaurant occupy the ground floor, creating a social space for the startup companies that will share offices in the building.

"The atrium becomes a shared space over many levels that encourages interaction between the employees of the companies within the building," said the firm. "This integration also encourages collaboration between companies of different services and disciplines." 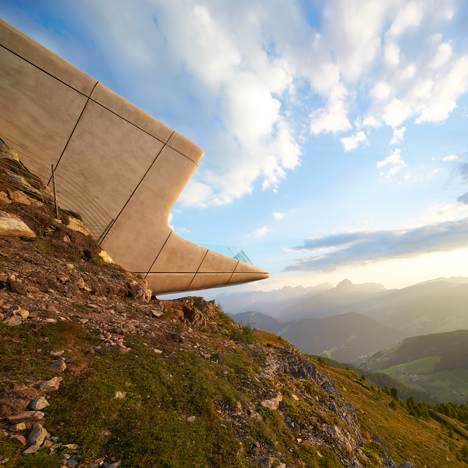 "Many IT and creative industry startup companies regard this collective research culture as vital for progress and development, and the design of the Dominion Office Building reinforces this concept with open connectivity throughout the building."

Black stripes spread across the white floor of the lobby from doorways and entrance barriers, appearing as elongated shadows.

Hadid was named the 2016 recipient of the Royal Gold Medal for architecture last week, making her the first female to be awarded the prize in her own right.

Hadid cut short a live BBC radio interview following the announcement due to a poorly researched question by presenter Sarah Montague, in which she incorrectly attributed 1,200 deaths to the construction of the architect's Al Wakrah stadium for the 2022 Fifa World Cup in Qatar. The BBC has since issued a personal apology to Hadid for the inaccuracy.