Slovenian studio SoNo Arhitekti has lined a book store in Trieste, Italy, with floor-to-ceiling stacks of shelves in patterns that reference the architecture of a local landmark (+ slideshow).

The wooden bookcases with irregularly-sized shelves cover the walls of the 177-square-metre Book Centre Trieste shop, which also features several display podiums as well as a children's reading corner.

Visitors can take a break on the store's two sofas, which feature grid-patterned upholstery and wooden side panels that lend readers privacy from nearby book browsers. 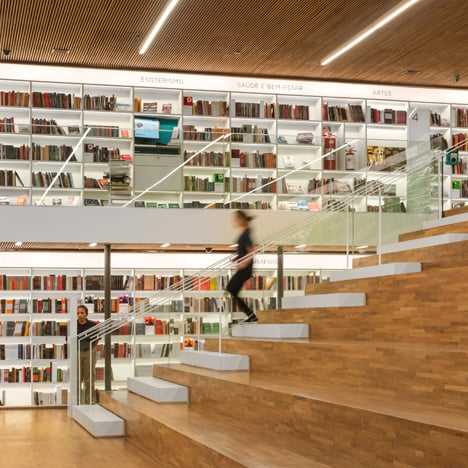 A counter rests on three white bookcases made from box-like shelves stacked into a row of diamond shapes.

A staircase to the upper levels of books is accessed and half-concealed by a second set of irregularly shaped bookshelves.

"The visitor is surrounded by books," said SoNo Arhitekti, which has previously designed a three-story Alpine residence with two house-shaped projecting rooms. "The pattern of the bookshelves and its composition accompanied by interactive displays become the central point of the space."

The book centre is housed in a 19th-century building in Trieste's Oberdan Square, and has been designed as both a bookshop and a social and cultural centre for the city's Slovenian community.

The architects referenced the external diamond brick patterns of the nearby Trieste National Hall, designed by architect Max Fabiani in 1902, to create the geometric forms of the bookshelves. The practice described the building as "a symbol of Slovenian presence in Trieste", due to its history as the centre of the Slovene minority in the city.

"The proximity of the Oberdan Piazza and Fabiani's National Hall has encouraged us to look more closely to the symbolic ties that are important for the Slovene minority living in Trieste," SoNo said. 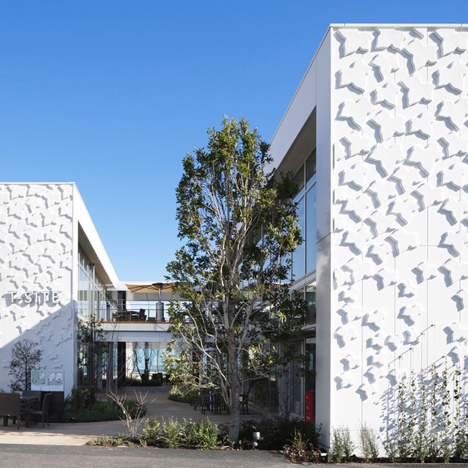 "A hint that would only symbolically show itself derives from Fabiani's masterfully designed facade's decoration," the architects added. "The decorative geometric element has been broken down and transformed into a modern structure, which represents itself in the basic pattern of the bookshelves."

Mexican firm Taller 6A also enclosed visitors in bookshelves, in a library renovation in Mexico city that install hundreds of wooden boxes on the walls, ceilings, and even under the glass floors.

Photography is by Žiga Lovšin.