Hanoi architecture office Studio 102 has transformed an incomplete house in the Vietnamese capital into an office for a landscape architecture firm, featuring plants that clamber over its slatted timber cladding (+ slideshow).

The offices for landscaping and horticulture specialist Mein Garten occupy a previously unfinished and vacant semi-detached house in the Trung Hoà–Nhân Chính borough of Hanoi.

The building was purchased as an investment property but left empty until Mein Garten agreed to rent it. The company then asked Studio 102 to convert the windowless shell into a series of multipurpose spaces for its offices and showroom.

The existing internal plan featured lots of enclosed spaces that conflicted with the open-plan concept outlined by the client, so Studio 102 removed several brick partitions to free up the interior and create lines of sight to outside from all of the rooms.

Mein Garten also insisted that a connection with nature was important for the offices. The architects introduced plants throughout the programme to create a more relaxing atmosphere and to help merge the internal and external spaces. 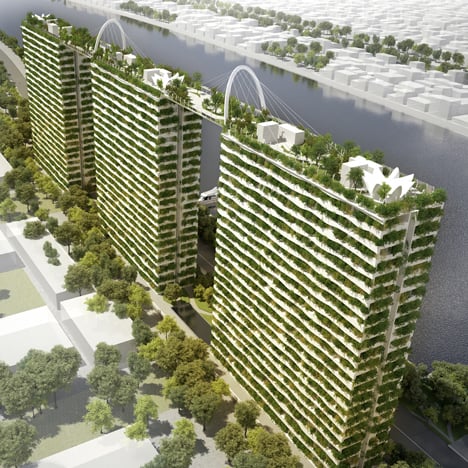 "We want to create a different office typology rather than a traditional closed, air-conditioned office," architect Hoang Vuong Dao told Dezeen. "The atmosphere is very important, especially for companies in the creative industries like our client. For us, plants or nature could do such a task."

Greenery appears in the garden, in a semi-enclosed space on the ground floor, around a decked patio on the first floor, on the roof terrace and on the building's walls and facade.

"The unusual thing is that, instead of being an element added to the building, the plants are integrated and become an essential part of the entity," said Vuong Dao. "The appearance of the building changes as the plants change."

Plant-covered architecture is popular in Southeast Asia, where the climate is suited to sustaining tropical vegetation. Recent examples include a house in Singapore with plants growing across terraces and up through its central atrium, and a hotel on the Vietnamese coast with greenery covering its slatted facades.

The Mein Garten office's street-facing elevation is largely shrouded by a framework containing horizontal slats of Durawood – a cement and wood composite able to withstand contact with plants and the region's subtropical climate.

By simply painting the existing brick exterior white and adding the timber frame, the cost of renovating the building was kept to a minimum and a series of environmental benefits resulted.

Plants that climb over this wooden trellis bolster the natural shading it provides, while breezes can still permeate the building and those inside are able to look out through the gaps.

"While other houses on the street have the same look, our building changes its look as seasons go by," Vuong Dao added. "Instead of blending with the built environment, the office blends itself with nature."

Vertical battens integrated into the fencing at street level meet perpendicular beams that extend towards the interior. This slatted ceiling covers a walkway made from stepping stones placed in a pond, which leads from the street to a reception area towards the rear of the building.

The shallow pond extends along the edge of a seating area in a corner of the covered outdoor space that occupies a large portion of the ground floor, with the glass-walled reception located at one end.

A brick-lined staircase ascends to the office levels above, where large windows look onto the outdoor spaces and planting incorporated into the scheme.

Staff are encouraged to step away from their desks and use the outdoor areas as additional work spaces, which the architects and client believe will result in a more relaxed and productive working environment.

"It is an office which brings people closer to nature, closer to each other, and makes them work more effectively," claimed Vuong Dao.

Photography is by Vu Xuan Son.