Amanda Levete's firm has revealed its design for a Maggie's Centre for cancer care in Southampton, England, set at the centre of a tranquil flower garden.

London-based AL_A has applied for planning permission to build the drop-in centre for cancer patients and their relatives alongside the oncology unit at Southampton General Hospital.

Scheduled to open in 2017, the building will feature an understated form and daylight-filled spaces, intended to create an "ethereal clarity".

"I wanted to create a place that is warm, welcoming and full of light, one that dissolves the boundaries between building and garden," explained Levete, who also unveiled her completed MPavilion in Melbourne today. 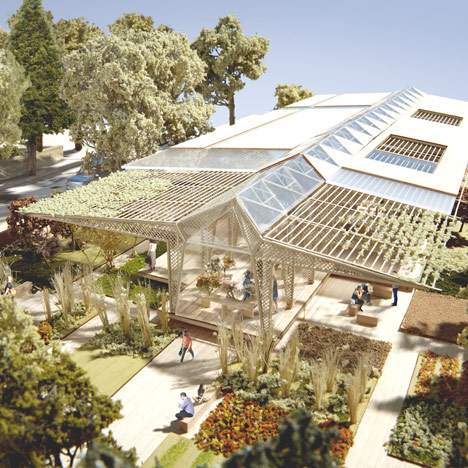 "It will be a sanctuary where people feel safe and valued, lifting the spirits of all who enter," she added.

The Southampton Maggie's Centre will be set amongst a garden that references the wild landscape of the New Forest – a nearby national park comprising vast expanses of wood and heathland.

This will be created by landscape architect Sarah Price, whose portfolio includes the 2012 Gardens at London's Queen Elizabeth Olympic Park.

The Maggie's cancer charity was founded by the late Maggie Keswick Jencks and her husband, architecture theorist Charles Jencks, to offer support to anyone affected by cancer.

There are now 18 centres in the UK, by architects including Snøhetta, OMA and Richard Rogers. New centres by Thomas Heatherwick, Norman Foster and Steven Holl are also underway elsewhere in the UK.

"Applying for planning permission to build a Maggie's Centre in Southampton brings us a step closer to supporting the physical and emotional wellbeing of people with cancer in Southampton and the surrounding areas," said Maggie's chief executive Laura Lee.

"The new Maggie's Centre will provide cancer support of the highest quality, which will complement the excellent clinical care that the hospital already provides," added Fiona Dalton, chief executive of the University Hospital Southampton NHS Foundation Trust, which is partnering with Maggie's on the project.

Levete made her name as a director of Future Systems alongside her former husband, the late Jan Kaplický. Recent projects by her studio include a pop-up restaurant serving tinned fish, and it is also working on a subterranean extension to the V&A museum.