London Design Festival 2015: British designer Ross Lovegrove has created a range of aluminium-encased wireless Bluetooth speakers for KEF, based on an earlier design for the UK audio brand.

The speakers echo the form of Lovegrove's 2007 Muon speaker – a two-metre-tall loudspeaker with a reflective aluminium exterior, produced as just 100 units worldwide.

The distinctive "pinched-in" shape of the Muon design is recreated in the Muo speakers' airhole pattern punched into its aluminium shell – a material chosen because it wouldn't create additional vibration.

Available in five finishes – gold, grey, silver, blue and orange – the triangular-shaped speakers can be stood vertically, or placed horizontally to rest on soft rubber feet. A sensor inside the speaker adjusts the sound depending on how the device is positioned.

Volume and power controls are placed at one end of the speaker, which has been designed to facilitate the best angle for sound emission. Although designed to resemble the original Muon loudspeaker, the Muo design carries a more affordable price tag – £299.95 compared to £91,000 for a pair of Muons.

The speaker was unveiled as part of an installation at Somerset House during London Design Festival 2015, which featured 100 anodised versions of the Muo speakers assembled in front of a Muon loudspeaker.

"I took that opportunity to look at the art of sound, so how sound waves resonate through the product, so the product becomes almost the sound wave," said Lovegrove, who has been working with KEF for ten years, in an interview with London Design Festival.

The festival, which took place from 18 to 27 September, also featured installations by Faye Toogood, Max Lamb and Patternity. 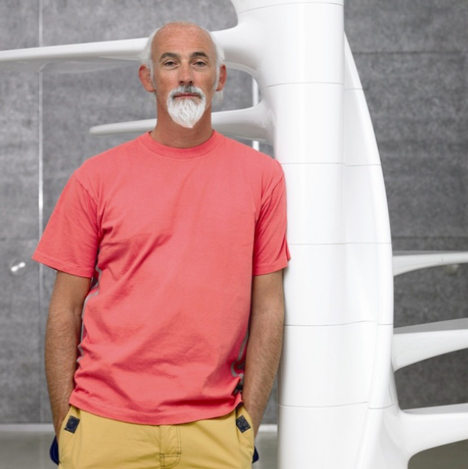 Other speaker designs covered by Dezeen include French designer Mathieu Lehanneur's 20-sided wireless speaker that can rest on any of its triangular faces, and Finnish brand Unmonday's white hexagonal ceramic models that can connect to each other by being rolled onto different sides.

Tokyo studio Nendo turned to traditional methods of production for its one-milimetre-thick ceramic speaker, created in partnership with a traditional Japanese potter and decorated with intricate patterns.