The oxidised-steel walls and prefabricated construction of this community library and sports centre near Newcastle, England, are influenced by the region's ship-building heritage (+ slideshow).

Hebburn Central was designed by local firm FaulknerBrowns Architects to provide the town of Hebburn in South Tyneside with facilities including a library, dance studios, events spaces, a swimming pool, a fitness suite, a sports hall and public sector customer services.

The 5,800-square-metre building is part of a wider regeneration project for Hebburn, which struggled economically during the latter half of the 20th century as de-industrialisation and the closure of shipyards on the River Tyne in particular took their toll.

Weathering steel surfaces recall the rusty hulls of ships in those yards and give the building an industrial character.

A similar approach to materiality was used for a complex of apartments and artists' studios housed in an old board-game factory in London and a factory in Beijing that was converted into a theatre complex.

FaulknerBrowns was invited by the local council to oversee a masterplan for the existing town centre that aims to revitalise the area and improve circulation. The architects placed Hebburn Central at the heart of its proposal, expecting it to become a catalyst for future development. 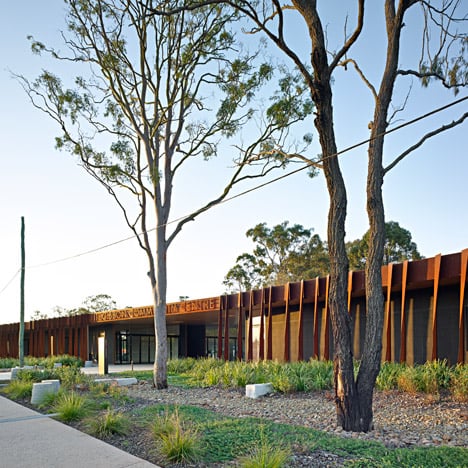 "The site's central location within the masterplan provided the opportunity to re-establish a sense of place, providing a focus and heart for the community," said the architects in a project statement.

By uniting various public services in a single building, the project makes efficient use of its plot and creates opportunities for social interaction within a space that is defined by its diverse uses.

"The benefits of shared space not only generate clear efficiencies but they also generate architecture that is rich in character and distinct in identity, creating spaces that are socially driven and environmentally responsive," the project team added.

To promote the building's social functions, large sections of the facade are glazed so the public has a view of what's going on inside from the surrounding concourse.

In particular, the library and pool hall are flanked by large windows that ensure daylight floods the interior and reduces the need for artificial lighting.

The open layout of the internal plan also allows light to permeate the rest of the building and creates lines of sight that visually connect the various spaces.

Opaque cladding predominantly comprising sheets of weathered steel and expanded metal mesh is applied to areas that require privacy and controlled lighting, including the changing areas and sports halls.

Prefabricated processes were employed in the production of the facades, in an attempt to reduce costs and increase the efficiency of construction.

Structural insulated panels made from a timber composite form a modular envelope that is fixed to a structural steel frame, "much like the buttressed hull of a ship."

Steel sheets with standardised dimensions that match those of the prefabricated panels are used to form the external surface, helping to reduce on-site cutting and waste.

The cold-formed metal fabrication methods used to complete the cladding enhanced the efficiency of construction and "capitalised upon the industrial heritage of the site and community by adopting technologies and prefabrication techniques that are synonymous with Hebburn's marine and ship-building pedigree," said the team.

The implementation of these off-site fabrication methods combined with the building's straightforward form ensured the project was completed within a tight budget and with a total build time of just 20 months.